In cooperation with Raiz Diseño, ONA and MAVI (Museum of Visual Art), we will be presenting a workshop in Santiago Chile on 16-18 October to explore ways of exhibiting craft in art galleries. This is a wonderful opportunity to extend the dialogue between contemporary craft in Australia and Latin America and will coincide with the publication of the first craft magazine Mano de Obra.

Images on the flyer are from Marian Hosking, Nicole Lister, Beth Hatton and the group exhibition Heresy (Craft Victoria). The brooch below is by Roseanne Bartley (a larger version can be downloaded here).

Here’s a wonderful opportunity to see some of what’s emerging out of South Africa, including Zulu pottery and Master Weave ‘telephone’ wire baskets and photography by Garth Meyer (hopefully, I’ll have names for the ceramicists and weavers soon)

The Eisenberg Gallery: The Victorian Museum of Experimental Art sits on an intersection in suburban Brunswick, Melbourne. It seems the perfect venue for the jewellery of Roseanne Bartley, who sources the detritus of street consumption as precious gems for her brooches and necklaces. You can see her recent work from the busy corner of Nicholson and Blyth Street until 12 September.

In the nineteenth century, the Arts and Crafts Movement turned to traditional cultures in response to the perceived sterility of modern life. With studio practice in the twentieth century, a number of individual craft artists were inspired by non-Western craft traditions, such as the East Asian ceramics. In the later twentieth-century, a number of craftspersons made individual pilgrimages to a wide range of traditional craft communities in order to absorb the more embedded lifestyle of making. For many, this entailed long-term commitment by craftspersons in assisting their host communities to sustain their craft practice in a globalising market.

You buy the story of where it comes from

In response to globalisation and its problems, the twenty-first century witnesses the rise of ‘ethical consumerism‘. Consumers hope that their patronage has positive effects on the community of origin. Fair trade coffee and chocolate are the most obvious new ethical commodities. At the same time, the relational paradigm in creative arts makes the construction of relationships through the work a part of the artistic process, alongside the product that results from it.

Relationships between modern and traditional makers are evolving in interesting ways. Those purchasing their products are buying not only a beautifully designed and made object, but also the story of its production. Relationships are diversifying beyond the standard relation of product designer and artisan. The new ‘superpowers’ such as India and China are now employing services of craftspersons in countries like Australia to make specialist objects for new wealth. In the context of the Kyoto Protocols, the new collaborations between makers, designers and manufacturers offer a grass roots approach to global cooperation.

The World of Small Things is an exhibition designed to explore the variety of dialogues between cultures that are currently being practiced in the craft field. Its goals are:

There’s some movement in the area of art textiles at the moment. Next year Ararat Regional Art Gallery will have an anniversary show to promote their collection of Australian textile art works. But sooner…

‘Art Textiles’ Public Conference
The Australian Textile Arts and Surface Design Association Incorporated (ATASDA) with support from the College of Fine Arts and The University of NSW, presents ‘Art Textiles’, a one-day conference at the COFA lecture theatre EG02, UNSW College of Fine Arts, Paddington. Keynote speaker is Jane Dunnewold, an Art Cloth artist from San Antonia, Texas, USA, who will speak on, ‘The Concept of Art Cloth’.

2009 will feature a number of forums for thinking about the role of art in a new bilateral world. The Selling Yarns conference in March will include workshops for artisan-design collaborations. In June, at Craft Victoria, the World of Small Things: An Exhibition of Craft Diplomacy will feature the fruits of dialogue between first and third worlds. And at the same time, an issue of Artlink will be published to air the complex questions in the new bilateral global order.

Here’s a call for expressions of interest for the Artlink issue: After the Missionaries: Art in a Bilateral World

Movements like Make Poverty History reinforce a vision of the world divided between helpless victims and those able to save them. Divisions between ‘developed’ and ‘developing’ nations, ‘advanced’ and ’emerging’ economies, ‘first’ and ‘third’ worlds, assume a singular path of history, on which the West happens to be ahead.

Australia has been positioned as a key mediator between first and third worlds. Though a rich nation by world standards, Australia does not have the reputation of an imperial power and finds itself amongst the countries of the South, at least geographically. As potentially the ‘most Asia-literate country in the collective West’, Australia has been granted the role of mediator between USA and China.

Art has an important role to play in this.

We are looking for articles about:

Articles are due by 1 March 2009. Payment is $300 per thousand words. Please send expressions of interest to Kevin Murray at beyond@kitezh.com.


Kate Derum We are in a holding pattern (2001) woven tapestry

I was very saddened to learn that Victorian tapestry artist Kate Derum had passed away. Kate was a wonderful artist who used the traditions of weaving to create quite poignant tapestries about its antithesis in modern urban life. She was an inspiration to aspiring weavers as a lecturer at Monash and as a leader at the Victorian Tapestry Workshop. I remember very well her contributions to committees at Craft Victoria. She was always generous and wise. Kate Derum will be missed greatly.

The second issue of Berg’s Journal of Modern Craft is now out. The first issue is still available free as a sample copy online.

Where rich and poor meet: a craft response to climate change, talk by Kevin Murray

The Kyoto protocols call for a multilateral approach to global warming. Third world demands for economic growth have to be factored in alongside first world abstinence. The doomsday scenario has opened opportunities for equal dialogue between the rich and poor of the world.

Emerging practices include collaborations between designers and traditional artisans. What is ‘world craft’ and what role might it play in building the trust necessary for negotiations to continue beyond Bali? 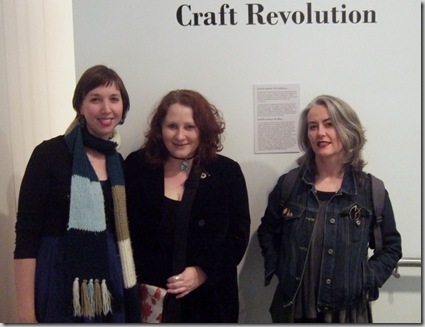 While the rest of Brisbane was roaring for its state rugby team tonight, a ‘quiet revolution’ was taking place at the Queensland University of Technology Art Museum. Catriona Brown (left) had curated an exhibition Craft Revolution, which featured work from strongly located contemporary craftspersons and proud craft guilds. At a panel with Kylie Johnson (centre) and Robyn Daw (right), we talked about craft’s place in the world today.

There was much talk about the importance of craft as a form of local production. Kylie talked about resisting the lure of making her work off-shore. While local in ethic, there was great interest in the shared struggles with craft scenes in other countries, such as in Chile and South Africa.

Revolution? Well, it doesn’t have the extreme radicalism that you might associate with the term. There are no craft guerilla organisations blowing up art galleries or IKEA outlets. But there’s certainly a move to home-grown forms of resistance. Let them bake cakes!

Craft has much to live up to. Luckily there are some passionate advocates on the front line.