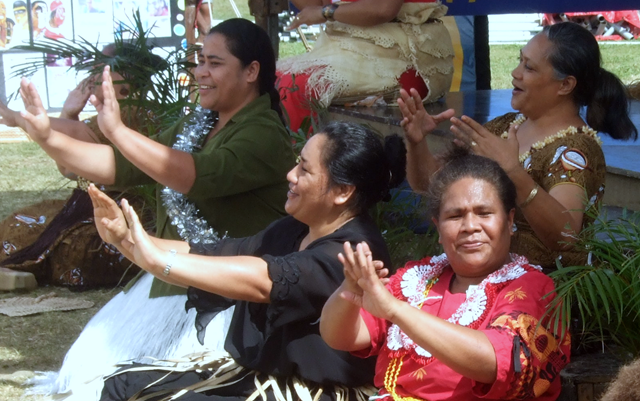 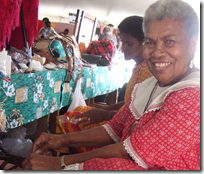 As a matriarch of the Fijian craft scene, Seniloli expresses a strong commitment to traditional values. The first value is silence when being taught. ‘You watch! If you ask questions, half the time you forget. Your head will be creating new ideas.’ The second is to keep it personal. ‘I don’t want to be taken in by retailers. I’d rather sell it on the price that I am happy, and that’s it.’ This doesn’t just mean a good return to the craftsperson – it can also mean giving something away as a gift.

I was in Fiji to participate in a craft workshop organised by the Fiji Arts Council with the Pacific Arts Alliance. This coincided with a remarkable cultural feast.

The second Wasawasa Festival of the Oceans brought craftspeople from across the Pacific. Under one tent were gathered makers from Samoa, Tonga, Tuvalu, Cooke Islands, French Polynesia, Solomon Islands, Papua New Guinea, Aotearoa and, of course Fiji. It was a spirited gathering, particularly when the Tongans were in full song. 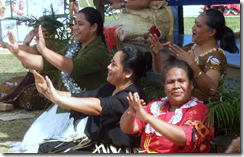 The festival coincided with the Miss South Pacific Pageant, which may sound clichéd, but turned out to be quite serious. Environment was the theme of this year’s contest. Over a gruelling week, each island’s representative had to demonstrate not only their beauty and charm, but also their cultural depth and political aptitude. As much as anything, the contestants provided elegant hosts for some stunning traditional fabrics and jewellery. Thankfully, Miss Fiji ended up winning the crown, and her thoughtful speech would put most politicians to shame. Next year it moves to PNG.

The Wasawasa Festival also included the first in what will hopefully be a series of craft workshops for local practitioners. For an outsider palagi (white person) like me, it was a wonderful way to learn about the local scene. Where people happy in their craft or did they seek something more? Was it becoming increasingly difficult to produce traditional craft? Did the tourist market seem limited to kitsch curios? Was there interest in product development and export?

One has to be careful here. Hidden in this questions is the assumption that it is the responsibility of the outsider to fix the problems in a poorer country. This certainly seems the foundation of much Australian involvement in the region. But craft challenges that position. As Seniloli noted during the workshop, packaging your culture for foreign markets involves many compromises. What was previously exchanged as part of meaningful rituals is now reduced to the universal currency of dollar bills. Objects disappear into the ether, rather than building a chain of reciprocation.

But if it’s a choice between sustaining or losing a tradition, it may be a compromise that makers feel is necessary. In which case, there are ways of building on the phenomenon of ethical consumerism to extend this symbolic chain across cultures. 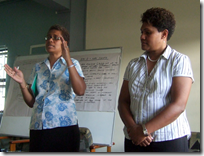 The workshop covered a range of topics, including ethical trends, supply chains, micro-finance, Fair Trade and Traditional Knowledge as Intellectual Property. Fiji is pioneering quite an important application of Regional Framework for the Protection of Traditional Knowledge and Expressions of Culture developed by the Secretariat of the Pacific Community in 2002 (can be downloaded here). This involves a cultural mapping of traditional knowledge throughout the villages of Fiji and the establishment of a system whereby use of these materials can be vetted and authorised. It’s a daunting project, but they are nearly half way.

During the workshop we heard a number of stories about opportunities for export had been lost because local makers were unable to meet deadlines due to unexpected contingencies. While this was initially attributed to lack of experience in doing business, there were some who thought that they were right to put personal obligations first.

To bring out the issues further, we adapted the role play previously titled ‘Good Intentions are Not Enough’. This time, the ‘Big Picture’ focused on the supply chain that stretched from an Andean village to a craft store in Vancouver. As happened previously, there were many hitches initially as the first products failed to gain sales in the urban market. However, this time, two new strategies emerged. First, the artisans decided rather than change their traditional methods to style a poncho, they would simply produce the yardage and have it finished in a factory down in Cuzco. Second, one of the parents decided to directly support the designers and artisans, rather then purchasing their products. The workshop showed how new pathways open up when there is a sense of partnership between producer and consumer.

The workshop concluded with a feeling that more needed to be done to connect craftspersons together, to learn of opportunities and to host future workshops dealing with specific issues like business skills and packaging. This provided an auspicious context for the launch of the Pacific Craft Network, as part of the Pacific Arts Alliance. This has the potential to re-establish a presence for the World Craft Council in the Pacific region.

In all, the workshop was powerful testament to a renewed spirit in craft across Fiji and the Pacific. This craft is much more than kitschy souvenirs for tourists. The challenge now seems to be how to build on these strong foundations.

The following days gave me the opportunity to get to know the craftspersons a little better. But that’s for the next post.