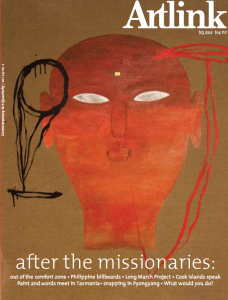 Movements like Make Poverty History reinforce a vision of the world divided between helpless victims and those able to save them. Divisions between ‘developed’ and ‘developing’ nations, ‘advanced’ and ’emerging’ economies, ‘first’ and ‘third’ worlds, assume a singular path of history, along which the West happens to be ahead.

Australia has been positioned as a key mediator between first and third worlds. Though a rich nation by world standards, Australia does not have the reputation of an imperial power and finds itself amongst the countries of the South, at least geographically. As potentially the ‘most Asia-literate country in the collective West’, Australia has been granted the role of mediator between USA and China.
Art has an important role to play in this.

On sale from 15 June. To say in touch with related developments, subscribe to Craft Unbound updates (see right panel).

One thought on “After the Missionaries”