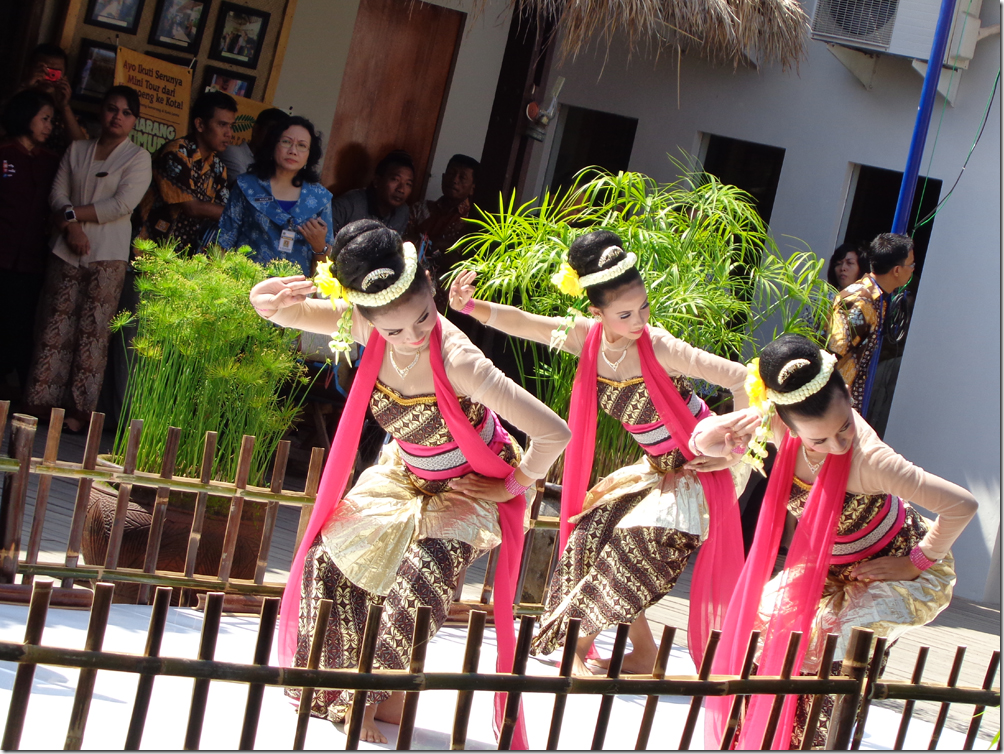 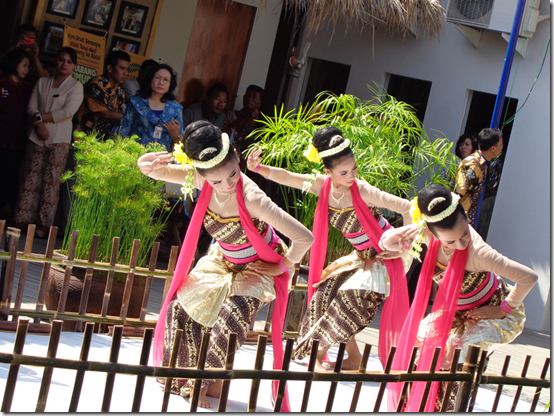 Batik is one of the world’s idiomatic crafts. Alongside techniques such as pottery, filigree, ikat, glass-blowing and wood-carving, it is a unique language of expression which has come to define a global cultural inheritance. In a rapidly dematerialising world, as more of life is conducted in the cloud, it is increasingly important that the gifts below that time has bestowed are maintained. Without space for innovation and creative exchange, skills such as batik will cease to play an active role in what we make of our world.

Within the craft canon, batik is particularly expressive. The flow of wax through the canting lends itself to a fluid graphic form, reflecting a sinuous natural world. The history of batik is the story of its surrounding culture: originating in Java, it has been influenced by the traffic of cultures in south-east Asia, including block-printed fabrics from Gujarat, Chinese jewellery and Dutch tastes.

But there’s also a subtle mystery in batik. Like darkroom photography, it works from the negative, beginning with an inverted version of its final outcome. Unlike more direct techniques such as painting, it requires a greater understanding of the interrelation between many phases of waxing, dyeing and watching. Maybe it’s that consideration of other processes that helps it reflect an interrelation of cultures.

A recent entrant to the calendar of batik events is the Semarang International Batik Festival. Semarang is a city of about 5 million on the north coast of Central Java. Founded by an Islamic missionary in the 15th century, Semarang soon fell under Dutch control and became an important trading centre, attracting Chinese merchants. Semarang shares with the other coastal batik centre Pekalongan a vibrant pesisir style featuring bright colours and graphic forms. Semarangan style batik patterns include the tamarind plant and historic features. However, the other batik towns of Central Java, such as Yogyakarta and Solo have a higher profile. But being overlooked provides the city with a powerful motive to raise its profile, particularly as the capital of Central Java.

Kampoeng Semarang is a hybrid cultural-commercial complex that has been developed by a young local entrepreneur, Miss Wenny. Miss Wenny is a new generation business woman with an interest in civic development. Her Semarang International Batik Craft Centre has transformed what was previously a dangerous area of the city into an active commercial hub. Only a year old, Kampoeng Semarang includes batik shops, restaurant, conference facilities and workshop space.

I’d been invited last year to visit Semarang wearing my World Crafts Council Asia Pacific hat. I noticed that although there seemed to be an active if small batik sector at work, there was little space for it to develop. There was no opportunity to experiment with new designs or products. A festival seemed an important step towards fostering skill development, innovation and increased exposure. To my surprise, KS quickly agreed and set a date in early May, leaving only five months for preparation. I had to credit them their confidence, but I was a little doubtful of what they could achieve in such a short time.

It was clear that we had to quickly mobilise international support for this venture if it was to succeed. The festival had to make the right impression on the local dignitaries if it was to be ongoing. And there was great promise in its future.

For the World Crafts Council, the batik festival was an important avenue for re-activating Indonesia’s presence in the region. While there is strong south-east Asian representation from Thailand and Malaysia, Indonesian participation had declined in recent years. It has been hard to activate the national and regional crafts councils.

Realising this opportunity, the newly appointed Senior Vice-President of the WCC Asia Pacific Dr Ghada Hijjawi-Qaddumi decided to attend with a mission to recruit new representatives. Her warmth and enthusiasm helped support the event greatly, and she even contributed $1,000 towards a prize for batik art in next year’s festival. Dr Ghada was joined by the President of the WCC, Mr Wang Shan, based in Beijing. China is hosting the 50th anniversary of the WCC next year across three cities, and it is important to have Indonesia as a significant part of this celebration of world craft. There was a very neat historical resonance in the WCC presence at this event, reflecting the importance of the Arab and Chinese influences in the development of the region.

Australia is a relatively newer visitor to Indonesia, though now the relationship is particularly strong with growing ties of economy and tourism. There has been a particularly rich history of batik exchange between the two countries. This has included connections with Aboriginal communities such as Ernabella and Utopia, where the batik has been particularly suitable for the fluid nature of art making. And in textile art, the influence of Indonesian batik has been important, reflected in the touring exhibition in Contemporary Australian Batik in 1989.

Now there is scope to extend this partnership to include design. Already there are fashion designers like the Queenslanders Easton Pearson who work with Indonesian batik, but there are many other possibilities for product development. Sangam: Australia India Design Platform has been growing a network of designers and craftspersons interested to collaborate. There is many prospects in expanding this network to include Indonesia.

Here we were fortunate to receive assistance from the Australian Embassy to bring two textile masters. Tony Dyer has been successful in establishing a career in batik art, sustained by overseas collectors. Dyer had last been in Indonesia nearly 40 years ago, when he was just starting his career in batik. We were able to show his work and Tony provided a hands on engagement with participating artists, swapping techniques and discussing the finer points.

Dyer was joined by Liz Williamson, Associate Professor at College of Fine Art, University of New South Wales and a designated Living Treasure of Australian craft .Williamson teaches a unit Cultural Textiles, where students have been traveling to India in order to engage rich living traditions of embroidery and dyeing. The hope was that she would find the right kinds of people and places to bring a contingent of next generation designers to Central Java. She presented her range of Woven in Asia which gave a taste of what a craft-design partnership might entail.

There were some key international players, then, for the all-important Simbolisasi (Gunting pita) opening of the inaugural Semarang International Batik Festival. Around 9am, the dignitaries started to arrive. This included the Governor of Central Java Bibit Waluyo, whose wife heads up the Crafts Council of Central Java. He was joined by the Dr Prasetyo Aribowo, Head of Culture and Tourism, Central Java, Professsor Ahman Sya, Director General of Creative Economy and Esthy Reko Astuty, Director General of Tourism Marketing. It was clear this was an event of national significance. 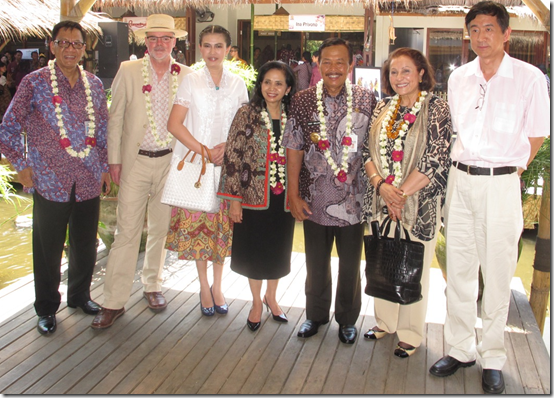 It was fascinating to witness the graceful nature of a Javanese opening ceremony. As with every occasion, this included elegant young women performing traditional dances. There was a fashion parade of both men and women showing colourful if demure garments by designers Anne Avantie and Ira Priyono. I was particularly surprised to see group prizes for best batik technique—it doesn’t seem the way here to single an individual out for attention. The event was officially opened by the Governor banging the traditional drum, which he did with a trill on the side before heaving into the drum proper. More significantly, he then went to the workshop to sign his name in hot wax, so it could be dyed into a commemorative batik afterwards. 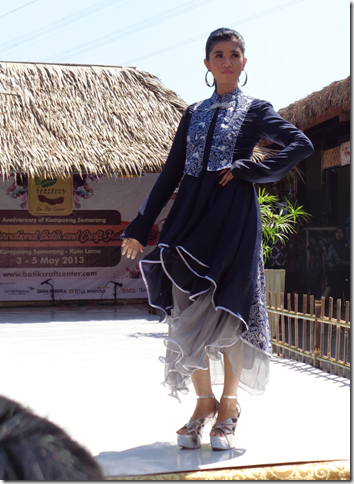 For the next three days there were stalls selling batik and craft products, which helped create a buzz. The live music was particularly good, including some languorous Keroncong, a Latin inspired Indonesian music. As word of the festival spread, high profile batik artists started to appear from the elsewhere region, showing how important such a forum might be beyond Semarang city. 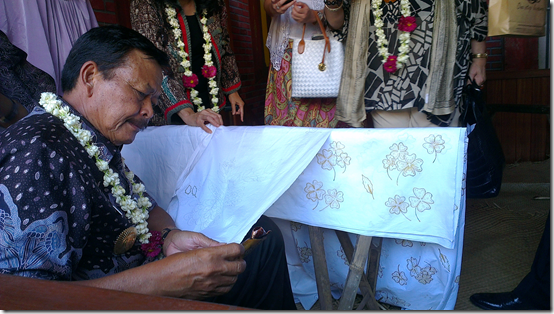 The Governor of Central Java, Bibit Wuloyo checking on the wax before signing his name.

On Saturday night, the reason for the timing of the festival became apparent with the Semarang Night Carnival. This was worth a trip to Semarang on its own. The costuming was inventive and exuberant. An other-worldly blend of traditional and modern music brought it to life. At the final concert, Semarang was sea of colour and movement, undulating to the rhythms of Indo-pop. Who knows what might happen if the batik festival were to form a partnership with the carnival, where it could feature the craft of making costumes.

On the final day, the organisers met with the international visitors to discuss how their event might develop. It was heartening that they able to accept the shortcomings and see this as a trial run. Much could be achieved quickly by establishing a database of batik artists and creating events like workshops where they could participate. It was clear that there wasn’t a media network that could assist organisations like Kampoeng Semarang to get word out.

Now that the first Semarang International Batik Festival is over, we can start dreaming of how it might develop. Would a prize be important, or is competition against the more collective nature of Javanese culture? Is there scope for individuals to develop pathways into batik as an art form? Would there be interest in collaborations with foreign designers?

One issue that did come up in the discussion was the depth of meaning attached to batik. Traditionally, it is a textile that gives meaning to life, with different patterns reflecting various rites of passage, such as pregnancy. I personally am interested in the labuhan ceremony, where people gather on the beach to throw their troubles in to the sea. 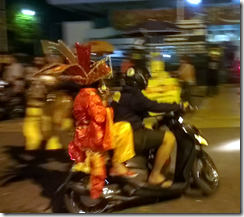 A challenging space has been opened up between the Semarang International Batik Festival and the Semarang Night Carnival—between batik as a product and the rituals that bring people together. There is much life in that space between.

Semarang has shown it is willing and capable of holding an international batik festival. It’s up to us all now to work together and help make the next one realise this promise.

If you have any comments or suggestions for the next Semarang International Batik Festival, please leave them in the comments below.

To stay in touch with future activities of the World Crafts Council Asia Pacific, subscribe to the newsletter at www.australasiancraftnetwork.net.

Thanks to the Australian Embassy, Jakarta, for supporting the Australian contingent, as well as Liz Williamson and Tony Dyer for giving themselves to the event. Pungki Purwito and Riza Radyanto organised the initial tour through Semarang, December 2012. Thanks for Wenny Sulistiowaty and Teguh Imam Prasetyo at Kampoeng Semarang for their commitment to batik. James Bennett and Jan Nealie provided much useful advice on the history of Australian-Indonesian batik exchange. Peter Craven helped greatly with the Indonesian connections. Malcolm Smith offered a warm welcome to Yogyakarta. And special thanks to World Crafts Council colleagues Dr Ghada Hijjawi-Qaddumi and Mr Wang Shan for giving their time to this precious event.