It’s hard not to enjoy the spectacle of oil paintings in the Prado museum. The vivacity of Velazquez is compelling. But the audio that accompanies the collection goes on ad nauseum about what ‘masterpieces’ they are. You soon realise that your enjoyment is being channeled into an imperial mindset. The vertiginous scenes of baroque paintings such as Titian seem to celebrate the verticality that separates the higher from the lower orders. I think it would be much more interesting to look at these paintings outside the Prado, say over with the colonials at Casa America.

Casa America is an centre for Latin American culture in Madrid. As part of their VivAmerica Festival, they present an exhibition from the southern continent called Iberomerica Global – Between Globalism and Localism. The theme deliberately avoids an ethnographic context and instead contextualises the ex-colonies with an issue that applies just as easily throughout the world as a whole. As it is, this approach falls into the easy solution of exploring ‘diversity’. While it is difficult to find a dynamic thread between the works, some are interesting on an individual level. 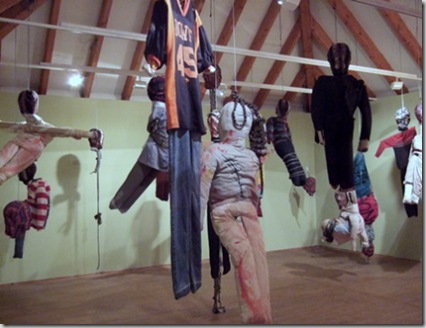 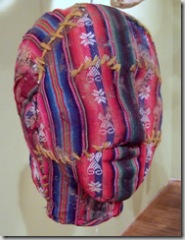 Gaston Ugalde’s installation is a macabre-comic gathering of scarecrow like figures, hung in contorted poses with heads crudely fabricated from traditional textiles. The work comes endorsed by Ticio Escobar, curator from Paraguay, and thus seems to be a case of found folk art. The text identifies the figures as part of a popular push to dissuade young people in La Paz from crime. In another century, they might have used real heads on stakes. While the work is affective, the anthropological method leaves many questions unanswered, such as how the makers of the original figures participated in making the art. The rest of the exhibition is mostly conceptual work that appears sophisticated but leaves the viewer tepid. The default position towards the ex-colonies appears to be a victimary scene of criminal violence.

There are many talks associated with the festival. I was at a session with Sergio Cabrera (Colombia), Arturo Corcuera (Peru), Rodrigo Fresan (Argentina) and Carla Guilfenbein (Chile). I may have been projecting, but they did seem a little awed by the colonial hub. But there was much interest from the floor. In attempting to find a common link between them, they did discuss the sense of responsibility for a people that weighs on them. However, there seemed to be no talk of Indigenous literatures.

Whatever the faults, it’s hard to imagine a similar festival in London with representatives of the English-speaking south. Perhaps it’s not speaking English that brings them together.