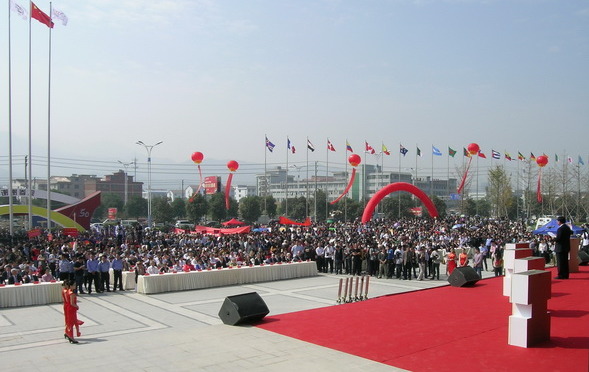 I came across a striking image of American philanthropist Aileen Webb recently. In the image Aileen, who founded the World Craft Council (WCC) in 1964, is about to get astride a Norton motorbike, she looks pretty happy. It was not the sort of image I expected to come across given the more staid images my cursory Googling of her had revealed. I could only conclude that Aileen looks like she might well have enjoyed well-crafted vehicular transport as well the sort of craft I associated her with. Aileen’s legacy, through this organisation, lives on and I had the pleasure of being an exhibitor with the organisation as it celebrated its 50th anniversary in October, in Dongyang, China. Hosted by the Chinese, current presidents of this global organisation, about 400 folk attended and participated in the celebrations.

The agenda for the five day summit led to many rich experiences, new friends, craft feasts for the eyes and mind, and many laughs. The opening event had it all: music, symbolic keys, the wearing, raising and waving of flags, speeches full of wise words and balloons. The gala dinner had even more. That night we experienced a fashion show, delegates wearing national costumes, toasts and demonstrations of knife skills and noodle making by highly skilled culinary wizards. Sitting at big tables with strangers meant they weren’t strangers for long after these sorts of displays and antics. Craft was the uniting force at all the events and a curiosity to know more about one another and how craft played out in everyone’s story led to fascinatingly rich conversations as we made our way around Dongyang.

As an exhibitor in the newly minted exhibition building, (which was being finished as we all arrived for set up) and just one of the many shows taking place, I was very taken with the kindness and friendliness of my neighbours from Malaysia who set the tone for the whole event. As a representative of the South Pacific I was in with those from the Asia Pacific subregion and it was the gorgeous Sarawakians who welcomed me for lunch on day one so I didn’t have to eat alone. This welcoming friendliness subsequently led to them helping me with a sale, lending me their power outlet, sharing their deep knowledge about the glorious crafts they had bought to show and sell, and I was even gifted with a piece of jewellery that I will treasure. There are so many warm memories from exhibiting. I loved trying the Chinese sweets and snacks my 21 year old volunteers/translators offered up then winning them over so they could gain confidence in practising their English on me. At the end of the show I realised I had been getting daily visits from a Chinese man. He seemed to just want to hang out, pore over every jewel, try and have bit of a chat and then flick through a sumptuous new book about contemporary jewellery from Australia and New Zealand.

Lectures, meetings, parades, awards, competitions and workshop tours were just some of the activities programmed. While I, like everyone else,  didn’t get to everything due to the con-current nature of running these sorts of large multi stream events, each activity was shared over breakfast or dinner as we all came together. It was so great to find like-minded, warm, generous folk from all around the world who were and are equally as mad about craft in its myriad of forms as I am.

What became apparent to me as I gained a sense of this wonderful international not for profit organisation, is that there is such a rich international craft vein to tap into. All of us were welcomed, whether working with more contemporary approaches to craft or traditionally – it’s an all-inclusive group and the richer for it. This WCC summit bottled for a few days the vitality that is craft today. Feeling part of a larger family that I hope I can contribute to in some small way into the future left me inspired. Craft in Dongyang seemed to act as a cultural diplomat of sorts, promoting tolerance, respect and mutual understanding for our common humanity. It pervaded this melting pot event, confirming Aileen’s initial intentions fifty years ago that the crafts can lead us forward perhaps towards a more peaceful future.

Vicki Mason is a contemporary jeweller working from Melbourne in Australia. Vicki would like to thank the WCC Chinese presidency for being such welcoming hosts.