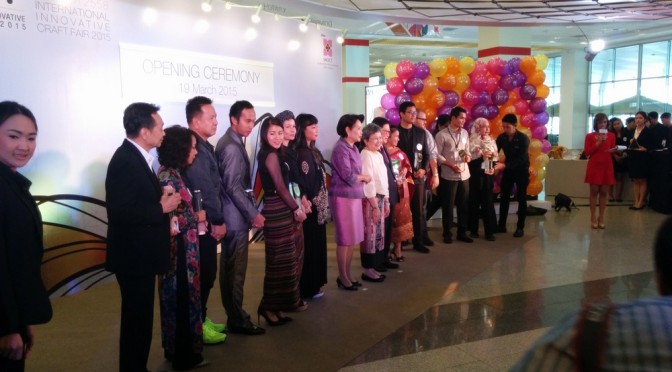 Thailand’s International Innovation Craft Fair represents a substantial commitment to the support of its crafts within a global context. The fair is organised by the Support Arts and Crafts International Centre of Thailand (SACIST). It includes an Innovative Craft Award, New Heritage Exhibition, Prototype Product Design Gallery, Craft Trend Exhibition, Mobile Gallery and more than 300 booths. Behind the scenes, it is the occasion for three significant MOUs involving the Intellectual Property Department, Thammasat University and National Discovery Museum.

The Thai crafts were quite impressive. Booths were organised in dense Bangkok style and filled with the latest products. I particularly liked the This Means That versions of Thai folk deities, Benjametha ceramics from the Muslim south, and the light fitting made in collaboration with birdcage craftspersons by Supachi Klawtanong.  Outside Thailand, the Lao textiles were outstanding, alongside the stylish textiles from Edric Ong’s studio, and impressive contributions from Cambodia, Vietnam and Myanmar. Beyond ASEAN, there were high quality products from India, Kygystan,  Taiwan, Syria, Iran and even Peru.

To complement the displays was a day-long seminar on ASEAN crafts, which featured wonderfully articulate and interesting designers and craftspersons from the breadth of South-East Asia. Pham Huyen Kieu from Vietnam’s Haki Craft was particularly impressive in his advocacy of co-crafting community as a way of attracting more young people. At the end, the speakers reflected on the common threads between their approaches. They all agreed that ASEAN designers shared a common commitment to supporting and using their local crafts.

Despite its scale, the Craft Fair still has room to evolve. The emphasis in craft innovation tends to be on home decoration. But there are only a limited number of light fittings or stools that can be sold, and there will always be stiff competition from cheaper industrial versions. Traditional crafts in Thailand are often tied to their rich array of cultural rituals. The challenge ahead is to find ways of adapting these rituals to modern lifestyles. Many rituals involve good luck. Today’s designers and makers have much to gain in adding auspiciousness to their products. Form, function and fortune would be a winning combination.

For more information about the fair, go to the Facebook page.