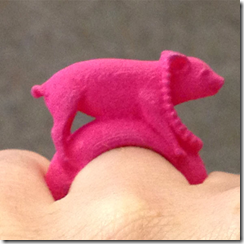 In February I had the pleasure of attending Jemposium, a symposium of contemporary jewellery held in Wellington, NZ. Among other esteemed practitioners, Ted Noten was billed as a keynote speaker, the Dutch jeweller who with associates Marcel van Kan & Cathelijne Engelkes had successfully transformed his Atelier Ted Noten (ATN) into a sought-after brand, utilising the tropes of fashion & advertising in a Hirst/Koons/Warholian fashion. Ted was elevated to a near-mystical persona, with witty slogans that suggested “Ted Noten loves women” among others.

Ted, alas, was not able to make it, and sent both a video of himself and his 2-I-C Marcel van Kan. Meanwhile, over at Photo-Space the ATN Miss Piggy “Wanna Swap your Ring?” project was in full swing. The concept: a certain amount of pink nylon pig- rings (of an infinite series) were arranged in the form of a gun, and you could take one and replace it with a ring of your own you didn’t want any-more. It could be a failed experiment from your studio (the text suggested), a ring (ie engagement) someone had given you that you never wanted, etc. It took place in different cities in the world, with each one assuming its own character. The wall of rings will now be exhibited elsewhere, so the New Zealand one, as others, one will form a unique snapshot of a time and place. 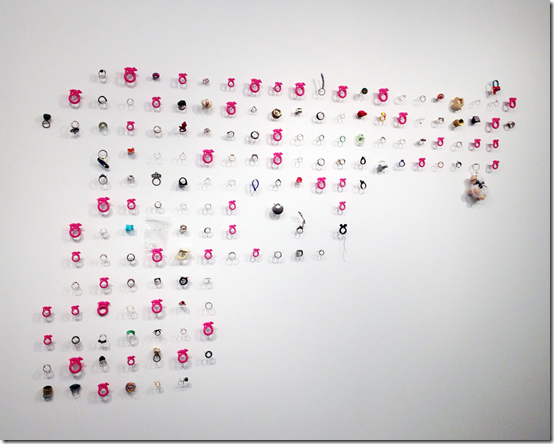 It troubled me somewhat, and investigating exactly why has taken a while to nut out. It’s complex and I’m not sure I’ve nailed it even now. Here’s the deal: the rings read to me as design-trinkets. A ring that had any associated value to me (even bad memories) as a straight swap to a ring that came out of a big plastic bag by the handful? That doesn’t seem fair, ATN – where are your memories and associations? Your offering, as it were, of yourself? Or are we buying into a rhetoric that says: because of your status, your mass-produced trinket is glamorous, desirable and equal one-to-one with anything we may have to offer? Strangely, if they had been for sale (they retail at 30 euros online), I would have been happy to buy one. Money has no intrinsic value, either. So what price do I put on my ring-associations? I would have been happy with a swap between people in different countries where we offered a similar ring (I loved the pin-swap with the ‘two hour time limit ‘making-parameter). I would have been happy to give a ring to the project, and it would have pleased me to think of it sitting next to the others. Interestingly, Marcel expressed ATN’s mild disappointment that the Japanese version contained many swapped rings made (on the spot) from wire or paper, or a cheap key-ring, for instance, thus subverting the suggested rules of exchange. So why not offer up a scrap of twisted paper, you ask? It…it just felt a bit disrespectful. Maybe the problem was that I was unable to proffer an equivalent item for exchange and thus felt thwarted by the original premise. Marcel had said that ATN wanted to play with ideas of value and worth, which, if that was the object, has been mightily successful in this case.

So, it wasn’t a high priority to get myself one…and yet, there was a little nagging envy as Jemposium people waggled their pink pig rings at each other. The allure of the desirable, finite item. The Birkin bag of Jemposium? Perhaps I should hurry down and get one? Rumours were that they’d all gone…Meanwhile, back at the ranch, Marcel van Kan took us through a presentation on the work of ATN. Despite being an admirer of the virtuosity of the work of ATN for many years, the talk left me a little cold for various reasons, not least being their condescending attitude to women…fickle, high-heeled-wearing, diamond-bedazzled-creatures… It felt like were we in another era (The text should read “Ted Noten loves his own idea of Women”). I was left with the feeling that there wasn’t much mana in the “Big Banana” of ATN.

At the conclusion of the talk Marcel, with a flourish, took a handful of leftover yellow rings from a previous project and threw them into the audience. One was heading straight my way, gosh… and as X (next to me) put in a heroic goalkeeper’s jump in front of me, the ring deflected off his sleeve and fell between my feet. Ah, the little yellow ring. Viperish thing. Hell, it was between my feet, everyone was excited, it was all good fun, wasn’t it? Still I couldn’t shake the feeling that I’d been swapped a shiny mirror for a piece of land. Beads and a handful of nails while the Euro’s steal the show. Again. I wasn’t the only one with misgivings, as later discreet, over-coffee-mutterings percolated.

So, I wore my yellow ATN ring for two days. I showed it off when people admired it. I tried to admire it myself. Were they now more desirable than the Miss Piggy ring? More exclusive? Was I special? X next to me was downcast, the pink rings had all been taken and the yellow was his last chance for a ring. (Although a mysterious VIP ATN banana ring showed up later…) Were we now in a strange ring-stratified hierarchy with ATN at the head? How did this happen so quickly, so easily? I loitered near the Miss Piggy ring-gun-wall later at the closing party and tried to screw up the courage to swap my yellow one for any number of the recognisable & desirable rings on the wall. Oooh, look, a minimalist Warwick Freeman, a cheeky Karl Fritsch, a lush Julia de Ville… not to mention the many other beautiful pieces with their hidden associations for the wearer. What was it that Warwick didn’t like about his ring? Or had some-one else put it there? The wall felt rich and meaningful and secretive. Full of narrative. Would I betray them by doing the clandestine swap? Certainly their work was desirable, but they had given it up in good faith. And I’m well-mannered by nature, was sober enough to decide it was probably theft, and thus kept my yellow ring.

By the last day I’d taken the yellow ring off. It wasn’t attractive in itself and I had very mixed feelings about it. I found X at the Masterclass and discretely handed it over. Oh Joy! I’d gotten rid of the troublesome thing and it had gone to someone who really wanted it, and was overjoyed to unexpectedly receive it. And here the story might have ended, except some time later, he came up and gave me a beautiful hand-made ring from his own studio… black, faceted, asymmetrical, bold & strong. A ring I would have chosen from a line-up. Tears sprang into my eyes. We each had a memento of Jemposium. We all came out happy. Larks sang from the treetops. The End.

Miss Piggy: “A democratised ring for everyone, available for a low price and manufactured in an unlimited series. With this rapid prototyped ring the artist tries to conquer the world: a genuine Ted Noten ring for every woman on earth is his ideal.” From the ATN website.

PS. On reading Kevin Murray’s ‘Till Death do us Part: Jewellery & its Human Host”( Noris Ioannou (ed.) Fremantle Arts Centre Press (1992)) I have a feeling some of this may have to do with a formalist vs a functionalist approach to jewellery. What do you think? Or is it Design vs Craft? Check out his article here.