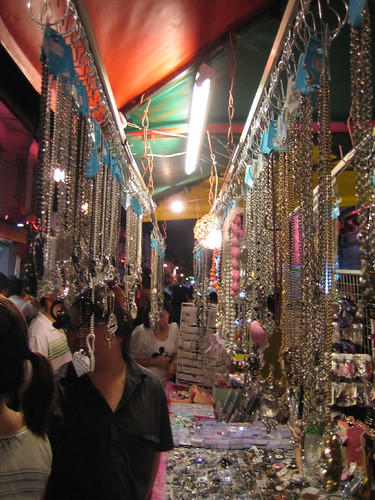 Jewellery on the street, courtesy of flickr and gurms

The enterprising students at RMIT Gold & Silversmithing last week organised a forum-style debate about the state of health in the field of contemporary jewellery. This event had been prompted by Susan Cohn’s comments in a forum last year that the ‘contemporary jewellery movement was dead’. There seemed much hanging on the presence or absence of the word ‘movement’ in this statement, with some interpreting it as a judgement on the field as a whole.  Cohn’s original intention was to talk about a crisis in the original terms of the contemporary jewellery movement, as a studio-based practice that contested conventions of adornment.

The main action of the evening was an argument between Cohn and Baines. Baines’ position was that jewellery as an art form took its reference from those traditions that preceded it. It was up to the jeweller as an individual to find their unique contribution to these traditions. By contrast, Cohn argued that what mattered most in contemporary jewellery was the wearer. To present her case, she proposed that one of the main reasons for the existence of contemporary jewellery was to deal with the way older women are rendered invisible in our culture.

It was a good argument that reflected two strongly held positions, but neither were likely to give ground. This intransigence does challenge us to think about contemporary jewellery as a heterogeneous practice. For Baines, the ultimate scene is at the bench, where the lone artist faces their own demons and angels in the task of bearing testament to the millennia of metalsmithing traditions. While for Cohn, the main arena is the street, where jewellery provides a currency for purchasing identities and pleasures. The position of each seems appropriate to their own domain.

So which is more legitimate, the bench or the street? Is the bench today an indulgence, focusing on a purely personal narrative disconnected from the surrounding world? On the other hand, is the street merely a scene of spectacle, that encourages short-term visibility rather than more profound and enduring meaning?

It can be argued that the bench has been the dominant space of contemporary jewellery, supported by dedicated artists, generous collectors and visionary gallerists. But today it is the street which provides a source of experimental possibilities, certainly in the Melbourne scene. Of course, this does not deny the importance of craft skill, which is necessary to give to the street a more enduring meaning than it currently supports.

I hope the argument between the bench and the street continues. It has much more territory to cover. But there is a further challenge beyond the specific scene of jewellery practice.

The first occurred at the RMIT Design Research Institute on Friday during a discussion about the Code of Practice for Craft-Design Collaborations. We discussed the arrangement whereby the Touareg nomads were paid half a million dollars for the use of their name in a new model of Volkswagen. This worried a  worker in East Timor, who said that throwing a large sum of money at a community can sometimes cause more problems that it might solve. An Indian designer took a contrary view, not to say that it doesn’t cause problems, but to question why we assume that we are the ones who know to use money better – ‘If I had all that money, I’m sure I’d blow it all on stupid things too.’ Clearly there’s a lot more to be said on this subject, but we hope that there’s more open discussion like this.

Meanwhile, an alternative conversation with Indian craft was occurring at the culmination of the Crosshatched project, organised by Sandra Bowkett and Minhazz Majumdar. For Sandra, this is the fourth time she has brought Indian artisans to Melbourne. On this occasion she opened up new opportunities for collaboration. For Minhazz, she came to Australia with great curiosity, professing that Australia figured very little in the view most Indians had of the world, especially compared to the US and Britain.

Two of the artists represented the Madhubani folk art tradition of Bihar. Pradyumnar Kumar worked with Anne Ferguson on realising a three-dimensional version of a story that he had illustrated in a prize-winning book. In the story, a firefly witnesses the trials of a walking tree as it battles a raging fire. It seems a particularly poignant story given the recent history of bushfires in Victoria. Except in this case, it is only the fire of the kiln that can same this unfired tree from eventual destruction.

Vipoo Srivalasa worked with Pradyumna’s sister-in-law Pushpa, to again take her two dimensional drawings into the third-dimension, in vessel form. They took turns in creating the outline and interior textures of the cobalt drawings on ceramics.

The third artist was a patachitra painter from Bengal. Chitrakars had been previously hosted during the Tramjatra project as an expression of tram solidarity between Calcutta and Melbourne. Montu Chitraka is part of the next generation of scroll artists. As part of his residency, Montu composed and painted a story of their journey to Melbourne, including the ‘highlight of my life’ in visiting the Melbourne Cricket Ground. The scroll was quickly acquired by the Australia-India Council, though he could have sold this many times over with the great interest it evoked.

So does this bring us any closer to Minhazz’ question about the role of Australia in Indian identity? We may well return the European concept of the antipodes, that constructed New Holland as a land where the natural order was upturned. A project like Crosshatched enabled these artists to try out different techniques, like moving into three dimensional works. Like the Bollywood film set in Melbourne, Salaam Namaste, Australia offers a space to explore new forms of Indianness. Whether this is a dilution or revival of Indian culture remains to be seen. At a person-to-person level, it certainly seems to have brought the two countries closer.

Perhaps one day we can think about reconstituting a new Gondwana, forest of the Gonds, by reuniting artists from lands in Latin America, Africa, Australasia, India and Middle East, who were once one land mass.