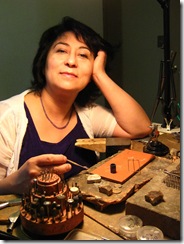 The 2009 Cheongju International Craft Biennale under its current director Dr. Ihnbum Lee seeks to position craft broadly within the arts as a unifying element. Ihnbum Lee claims that various art forms have been ‘boxed in’ to separate disciplines, making it difficult to experience their common nature. For Lee, craft offers an alternative to the commodification that has both put the planet in peril and separated arts from themselves. Craft in this biennale is engaged in ‘a search for meaning in a tortuous era’.

So how will craft connect with other art forms, such as dance, music and poetry? The Biennale contains several elements:

Of particular interest is the way these themes have an underlying poetic vision, associating the object with flows of nature in particular. This suggests the possibility of a uniquely Korean perspective on modern craft.

It seems important in an event with such a substantial vision for craft that there is an open dialogue to reflect on what emerges from this event. Travel has become less possible for many people, but the organisers are trying to attract craft practitioners with a Home Stay program (details on the website).

So what will emerge when craft springs out of the box? Jack in the box? Pandora’s box? We look with interest.