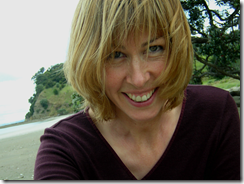 Fran Allison is a New Zealand jeweller who interprets the ornamental traditions of her region within the context of her own cultural heritage.

Fran was born in New Zealand but graduated from Middlesex University and the Royal College of Art, London. She has shown her work in number of solo and group exhibitions including Assorted Titbits at the Dowse Art Museum and JOC (Jewellery Out of Context), which toured internationally. She currently lectures at Manukau Institue of Technology.

Her work for Welcome Signs is a Daisy Doily Chain, made from deconstructed crocheted white doilies collected from second hand shops. The daisy stems are made from lollipop sticks. According to Fran, ‘Each doily retains some trace of the women who lovingly crafted and used them.’

The daisy chain is one of the most common childhood encounters with the idea of jewellery. After romping through fields, children settle in a daisy patch and start making chains for each other by knotting their stems. Fran combines this game with the doily, which was one of the most common forms of needlework producing covers for household objects.

Living in the Pacific, Fran’s work also connects with the lei, the floral neck wreath used to honour guests. Fran’s Daisy Doily Chain creates a kind of lei for someone of European heritage (Pakeha) who is born in the Pacific. 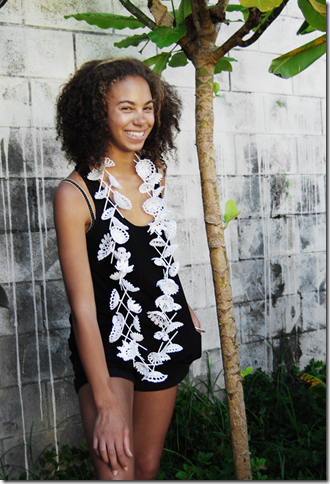 Fran’s work will feature in the Welcome Signs exhibition.

Journalist and ‘comix historian’ Patrick Rosenkranz has made a documentary that tells the other side of the story. Crafted Over Time features revivalists who are seeking to return to the roots of craft in the pre-technological age. These include  ‘glassmaker, a stained glass designer, bookbinders, instrument makers, stonemasons, a cannon maker, and even flint knappers.’ These revivalists work mostly in isolation, with little economic engagement in the world, and they are mostly men.

Both worlds seem passionate about the making process. But each move in fundamentally different directions. One moves collectively into the world, mediated by all the new social networking technologies. The other wanders alone away from the madding crowd, isolated in their craft. Is one path more true to the spirit of craft?

While lone craftspersons can seem to be hiding from the world, in terms of continuing craft traditions and maintaining diversity of skills, they do seem to play an essential part in the world. But their potential still waits for someone to come along who can find a way of linking it with the world outside. Meanwhile, they keep the flame alight.