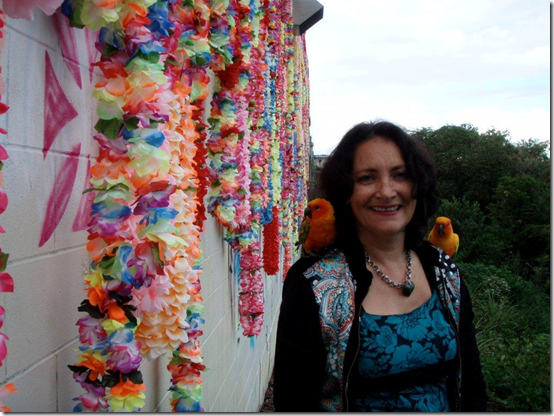 Niki Hastings-McFall was born in Titirangi, West Auckland, NZ. Much of her work is inspired by her Samoan heritage, discovered when she first met her father in 1992. She trained as a jeweller, and has a degree in Visual Arts from the University of Auckland at Manukau School of Visual Arts.  Both her jewellery and her larger assemblage works directly  reference her urban environment whilst maintaining strong connections to Polynesian culture.

Much of her earlier work is a response to the stereotyping which so often surrounds the South Pacific. As a Pakehaa / Samoan she uses the iconic to question the myth as a  way of exploring the liminal space which both separates and unites the different cultures that represent her place within a contemporary Pacific context. 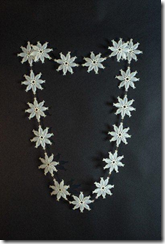 Niki Hastings-McFall Too Much Shushi Lei

Aesthetically speaking some of the work she is presently engaged with is not necessarily overtly Polynesian. However it is still generated by her signature understanding of past and present Pacific material culture twinned with an urban sensibility of post colonial Aotearoa

Maryann Talia Pau has quickly shot to prominence as an artist able connect her Pacific roots with urban Australian aerials. Though born in Apia, Samoa, she moved to New Zealand while only one year old. She fondly remembers growing up in West Auckland close to family and in a church community, though religion seemed more about the making than the praying. Time was spent singing and making craft. At school, Maryann remembers constructing elaborate flower compositions for school competitions.

At the age of ten, her family moved to Melbourne where she initially felt out of place. This was further compounded by her experiences in high school where she felt different and separate to the other few Samoans attending the school. This was also Maryann’s first experience of being called fair-skinned by other Samoans, which she found very bizarre.

When she was thirteen, Maryann went home to Samoa with her mother and sister, her first trip home since she was born. It was also to mark Maryann’s entry into High School. While she was there, the island experienced a violent cyclone. She remembers staying in her mother’s village where, despite the mayhem outside, everyone was calm — just ‘going about their ‘business as usual. Such was their strength and organisation and knowledge to continue and thrive.’

At Melbourne University, she found a collective who were also exploring what it meant to be Indigenous. There was resonance with the Stolen Generation – ‘I could relate to the whole dislocation thing.’ She has since continued this association through her art. And on a personal level, she started a family with a Murri man from Queensland. The experiences of growing up away from family, of relocating several times with a young family and wanting to engage with the Pacific Island community has prompted the desire to show her art publicly.

Her inspiration for making art came partly from a weaving circle at the Selling Yarns 2 conference in Canberra, 2009 where she worked together with the Elcho artist Roslyn Malŋumba. Maryann remembers Roslyn saying, ‘”You are meant to weave.” It felt so natural and right to be weaving. And to be weaving with a mother from this land, that was special!’

Her first break came with the Craft Cubed exhibition city/country at Craft Victoria, last August. Maryann made a breast plate using salvaged pieces from an ie toga (Samoan fine mat) and shells collected over several years. This breast plate is called Fa’amolemole, pe mafai ona tatou lalaga faatasi? (Please, can I weave with you?). Then she found a place in Precious Pendants at Object Gallery, where she created another breastplate called Mo lo’u Tama (For My Dad), an artwork celebrating her family’s 20 years in Australia. Both of these pieces recycle materials collected and gifted and are mixed with synthetic materials such a satin ribbon. Earlier this year, Maryann’s enthusiasm for Rosanna Raymond’s Tapa Jeans collected by the NGV led her to be invited to show companion works for the L’Oreal Melbourne Fashion Festival Cultural Program, which became the exhibition Fashioning the Mana. A total of four adornment works were installed in the Oceanic Gallery, the first contemporary work by a Pacific Island woman for the Gallery. Maryann’s work is currently showing in a group exhibition called ex.o.dus at Blacktown Art Centre, NSW where she has the precious ie toga which she has salvaged and kept for future works.

Maryann’s work repurposes traditional Samoan craft to make the kind of overt statements necessary in a noisy urban context. She transforms the collective fala (mat) into individual breastplates, embroidered with shells to proudly proclaim its culture. Making art has enabled Maryann to maintain a connection with Samoa, as she sources materials and objects. The sacredness of each piece is delivered through the materials which have either been gifted especially to Maryann or passed on with the belief that they will be turned into something new, beautiful and meaningful. Even though she left Samoa when she was only one, the strength of island life seems to be something that she carries with her, propelling her forward to share and participate.

Maryann is fiercely positive, hopeful and energised by the dynamic creative representations of the Pacific Islands. ‘The response so far to Pacific Island artists based in Australia has been very affirming. There is still much more we can do, but we are definitely visible and there are great things coming.’ The story is just beginning.