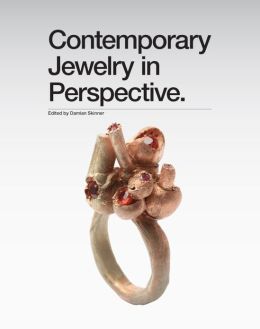 The new publication Contemporary Jewelry in Perspective (Lark) helps realise the vision that Damian Skinner brought to his role as editor for Art Jewelry Forum (until 2012). As a New Zealander, Skinner has argued forcefully about the need to open contemporary jewellery up to perspectives from non-European cultures. According to his view, while the movement has its centre in Munich, its evolution in ‘peripheral’ regions such as Australasia and Latin America need not be seen simply as aspirations to European culture. The book includes contributions from Skinner himself (Australasia), Valeria Siemelink (Latin America) and Sarah Rhodes (Southern Africa) that identify the original contributions made from these regions to the broad global conversation about preciousness and adornment.

I was part of a roundtable in Seattle that Skinner convened with curator Mònica Gaspar, Benjamin Lignel (current editor of AJF) and Namita Wiggers (Director, Museum of Contemporary Craft, Portland. The task was to develop a critical framework for contemporary jewellery. After much discussion, we settled on a spatial analysis that looked at the way the object circulates between bench (workshop), plinth (gallery), drawer (collection), page (book), body (desire), street (fashion) and world (ethics). Each space has its own set of critical values for judging the worth of the object. What this enabled us to do is to situate arguments within the field as forms of contest between spaces. It was possible thus to say that the relational push in recent jewellery practice champions the street as the authentic scene for jewellery, where the meaning of works is realised through use rather than limited purely to the intentions of the maker (bench). This helps clearly identify the interests at play in these arguments. In particular, it offers an alternative to the simple linear progress of ideas that seems the implicit understanding of conventional art history.

Clearly, we had to be quite selective about the spaces that were included. There were some, such as bin (thingness) that could not be included (ironically in this case). But we did hope that the book might trigger discussions about spaces that we had left out, or wrongly included.

But interestingly there is the potential to apply this kind of spatial analysis to other media. Namita has already used this framework to look at ceramics (playfully including the tent as a space). This offers a potentially engaging and challenging review of craft theory, beginning by spatialising the art object within individual fields, then attempting to look at broad patterns that connect them together. While the life of the art object is predominantly on the plinth, the craft object seems distinguished by its potential to travel into other modes of existence.

It is to be hoped that this yellow slab of a book sits loudly on the library shelf and in the gallery bookcase testifying to the liveliness of contemporary jewellery as a field of creative and intellectual endeavour. Future companions would be most welcome.

One thought on “A spatial understanding of craft practice”