Fryza Pavitta is an Indonesian jewellery designer currently based in Jakarta. She was born in Samarinda, East Kalimantan. She studied Industrial Design at Bandung Institute of Technology, where she developed a number of jewellery pieces including Zapp, which was a knife turned into a necklace.

She also developed a work of ‘distributed jewellery’ titled Sumbanese Contemporary Narrative Jewellery. The work includes symbols from Sumba culture about mythological forces of earth and sky. According to Fryza:

For Sumbanese, the sky is filled with ‘star dust’, made from souls of ancestors that look down on the living, offering rain as a blessing. This is represented by the silver chain. The earth is a female figure, represented in the U shape of a bowl, filled by the rain. On this are various shapes including living creatures and the omega symbol of woman. Finally there is the level of the sea, which represents potential loss. 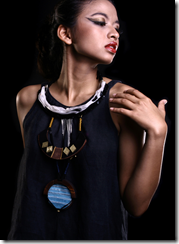 Women’s activity is particularly important in this mythology. The weaving of the tenun ikat is symbolic of the string that ties the earth and sky together.

The piece itself is strung together. Components can be detached. The piece is designed to be distributed among others.

Since graduating from Bandung, Fryza worked for several months in Geoti Studio, designing sculptural objects from an ashtray to a city park. With others, she has also shown work about the wedding ring and the hand gestures of a married couple.

Back in Jakarta, she now works for the industrial designer Leonard Theosabrata. She plans to continue with jewellery.

This work will feature in the Welcome Signs exhibition. It’s an interesting example of how the jewellery object can carry a story that connects people together. We can only imagine the very special situation in which it is used and the continuing connection that its owners will experience.