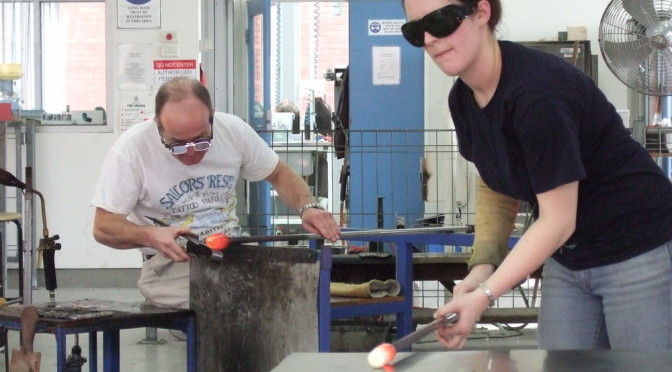 Longer version of an article published in the Conversation

In his budget reply speech, Bill Shorten claimed that ‘Coding is the literacy of the 21st century.’ While offering a positive direction, we should question whether the only future is on the screens we see before us. We should not forget the material world in which we live and breathe. As the post-industrial West faces endemic unemployment, many are looking to craft for a positive future.

Last year, President Obama personally hosted the annual Maker Faire at the Whitehouse, reviving national pride in making things through local production, featuring neighbourhood labs that offer services such as 3D printing. Once the centre of the automotive industry, Detroit has now opened a Craft Manufacturing Complex to revive production in the handmade. The Craft in America Center in Los Angeles produces a national television series celebrating craft for PBS, which is already into its fifth season.

In the UK craft contributes $6.5b to the UK economy. The Crafts Council actively presents craft in the public eye, including a recent manifesto ‘Our Future is in the Making’ launched in the House of Commons to promote craft in education. Undaunted by the outsourcing of iconic English labels like Wedgewood, the local government in Stoke-on-Trent has recently invested $1.3m in the transformation of potteries to craft studios. Across the sea, the Crafts Council of Ireland receives annually $4.1m in government funding to support craft initiatives such as Future Makers to nurture the next generation (a per capita equivalent in Australia would be $20.5m for a national craft organisation).

University of South Australia Associate Professor Susan Luckman’s recent book Craft and the Creative Economy reflects on the growing interest in the handmade, prompted by increasing awareness of exploitation in global industrial production. She comments, ‘Craft, as both objects and process, appeals in this moment of increasing environmental and labour awareness as an ethical alternative to mass-production; craft also speaks to deep human connections to, and interest in, making and the handmade as offering something seemingly authentic in a seemingly inauthentic world.’

The rise of the maker movement and the hipster aesthetic places value in the handmade as an antidote to a market flooded with industrial products of dubious origin. This direct relation between buyer and producer has seen the leading e-commerce platforms etsy.com exceed $2b in total transactions last year. The internet promises to extend the intimacy of the local market to a global audience, offering a sense of connection that is lacking elsewhere.

Closer to Australia, the economic tigers and dragons of Asia seem committed to the future of their craft heritage. In 2012, China assumed the Presidency of the World Crafts Council, spending $24m last year on a single international gathering to celebrate its 50 years. Its program involves the development of World Cities of Craft, the most recent being Dongyang as a centre of wood carving. South Korea vies for international leadership with a number of global craft events, including Cheongju International Craft Biennale opening this October, featuring the exhibition Beauty and Happiness curated by Alain Botton. Under its Living National Treasures program, Japan continues to provide 60 revered craftspersons with an annual salary. The continuing significance of craft in India is evident work of the Crafts Council of India, the Ministry of Textiles, and Nahendra Modi’s own personal commitment to continue Gandhi’s support for the khadi (handloom) cotton.

How does Australia feature in this craft world? Surprisingly, Australia was once a world leader in craft. The Crafts Council of Australia emerged in 1964 as a response to an invitation from the World Crafts Council to attend its inaugural event in New York. In 1973, the Crafts Board was established to represent the arts in the Australia Council alongside Visual Arts, Dance and Literature. In 1980, Australian ceramist Maria Gazzard was the first elected president of the World Crafts Council. Political leaders sought to identity with popular crafts, such as Don Dunstan opening the Adelaide’s JamFactory Craft Centre in 1973 and Rupert Hamer launching the Meat Market Crafts Centre in 1977.

Since then craft has largely disappeared from the national stage. In 1987 the Crafts Board of the Australia Council was incorporated into the Visual Arts/Crafts Board, which in the 1990s merged into the Visual Arts Board. Finally, the national link to craft was lost with the decision in 2011 to de-fund Craft Australia. Recent political leaders have failed to use Australian crafts to demonstrate their national pride – except for the personal commitment of John Madigan and Nick Xenophon to purchase Australian-make crockery for Parliament House. The now corporatised state-based crafts councils such as Craft Victoria and Adelaide’s dynamic JamFactory generate much local activity, but they are not supported by a national platform.

While other nations have attempted to re-focus on making things, the ‘lucky country’ has come to depend more on what can be extracted from the land than is produced on it. The ‘clever country’ imagined during the Hawke-Keating years made a virtue out of the loss of manufacturing, heralding a knowledge economy that focused on financial and education services. But with the end of the mining boom, we are looking at the impact that this loss of productive capacity has on our ability to sustain our future. What exactly will be the legacy of our good fortune apart from large holes in the ground?

A recent article in Progress in Human Geography  by Chantel Carr and Chris Gibson from University of Wollongong advocates for re-evaluation of ‘making’. They write about the ‘popular narrative arc’ that invokes images of rust belts and ‘despondent manufacturing workers filmed leaving their workplaces.’ The authors argue that this has led to a neglect of the continuing centrality of material production to human life.

Though Australian craft is rarely seen on our national stage, we have actually made many unique objects of enduring value. As a material art, craft expresses in a tangible appreciation of the land. Using Japanese techniques, Australian ceramicists give artistic expression to the rich soils, glazed with ash from our native timbers. As shown in this year’s Venice Biennale. Aboriginal communities from central Australia use the unique plants of the desert to tell sacred stories in fibre sculptures. Wood craftspersons are learning how to adapt European techniques to the challenges of our indigenous timbers. Jewellers have taken the egalitarian approach to materials and learnt how to make exquisite works out of rubbish. And Australia has built a specialisation in glass that is a leader in the Asia Pacific.

To a suit in Treasury, the direct contribution of craft to our economy is likely to be small, but its symbolic value should not be underestimated. Sport also has very little productive value, yet it celebrates a national vigour and striving that carries over into everyday life. At its core, our crafts represent a fundamental commitment to make something enduring out of what we are given.

This year is a critical time to review the role that craft plays in Australian culture. In September, Melbourne will host the inaugural Radiant Pavilion, an international jewellery festival, along with the state organisation’s Craft Cubed and national conference, Parallels: Journeys into Contemporary Making to be delivered by the National Gallery of Victoria. This conference culminates the National Craft Initiative (NCI), managed by the National Association of the Visual Arts (NAVA). The 2014 report Mapping the Australian Craft Sector called for an urgent review of its sustainability.

NAVA is expanding beyond the visual arts. According to NAVA Director Tamara Winikoff: ‘The extent of the Australian community’s engagement with craft and design (over 2 million participants) is a powerful affirmation of the deep seated satisfaction which people gain from the exercise of their imagination and skill. The ambition of the National Craft Initiative NCI is to stimulate engagement of the Australian craft and design sector with new ideas, ways of doing things, connections and opportunities.’

This year could be a turning point, or it could be more of the same. For the past two decades, the cult of the new prevented us from building on the unique traditions we have established. Arts talk today is infected with corporate phrases such as ‘disruptive technologies’, ‘breaking down barriers’, and ‘design thinking’. The obsession to break with the past weakens the social and community values that underpin meaning.  Understanding where we have come from offers a trajectory that can guide us into the future. According to Marian Hosking, President of the newly revived World Crafts Council – Australia, ‘Today’s craftsperson draws on both traditional craft practice and new technologies, with an understanding of historic and social precedence.’

The end of the mining boom is a chance to review the implicit direction of Australia as a nation. Is it enough just to be smart? What will happen as Asian countries inevitably raise their wages, develop first rate universities and create their own designs? Crafts help us answer that question. Crafts demonstrate that we know our place in the world and are committed to make something from it.