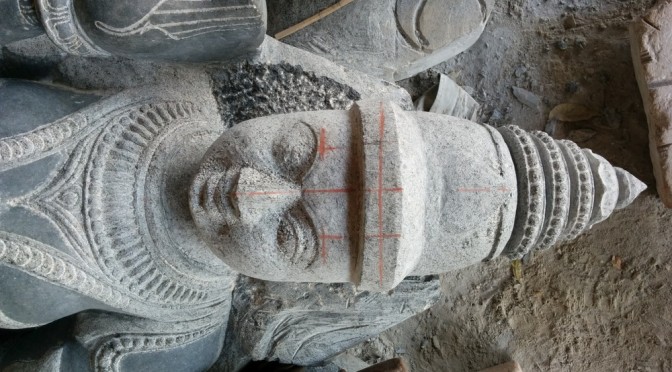 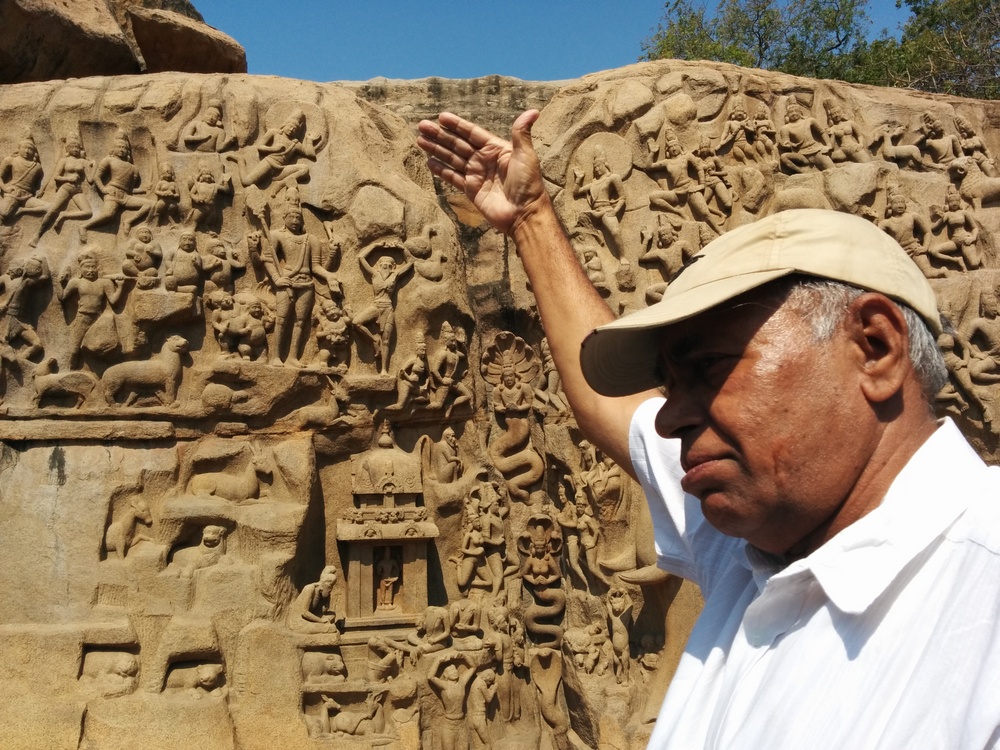 S. Swaminathan giving his learned analysis of the Mamallapuram sculptures.

While we’ve been subject to gruesome images from the Isis insurgency, the latest scenes of destruction to Assyrian stone artifacts are particularly shocking. Even if vile in lack of regard for humanity, the beheading of an ‘enemy’ at least has the logic of war. Whereas the smashing of ancient sculptures seems inexplicable. Why destroy our link to the classical civilisations of Mesopotamia?

As Guy Rundle wrote in response to this devastation “…without our heritage and a commitment to it, there is no ground to life, to meaning.” We can keep plugging away in life, paying bills and meeting deadlines, but in the end we are faced with the question: what lasting culture do we have to pass on to the future? 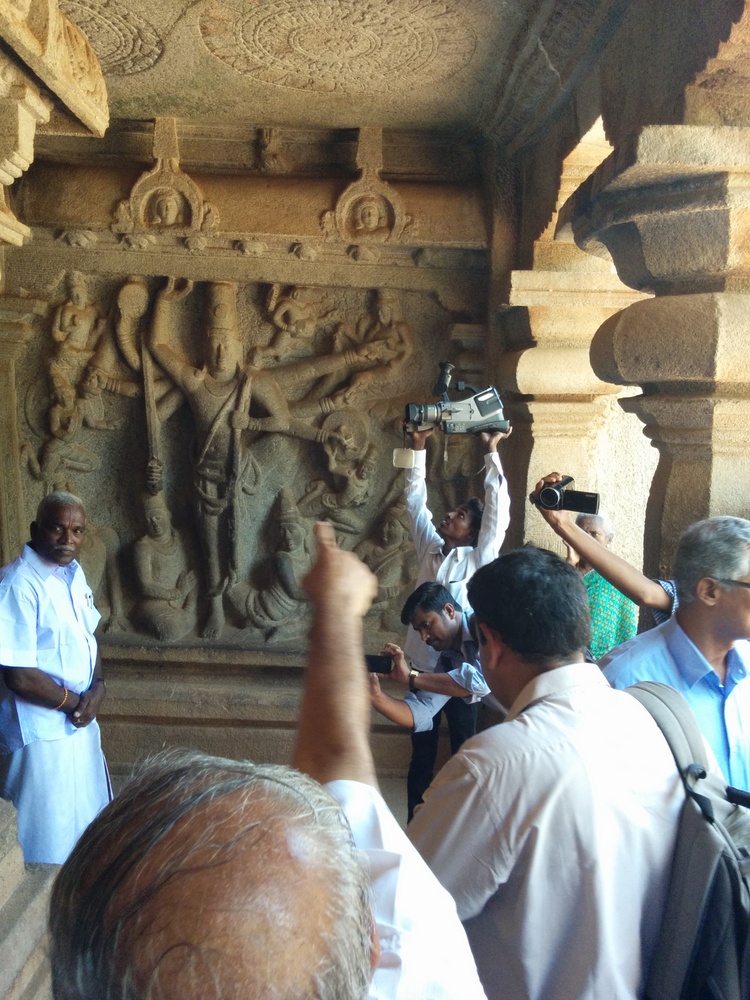 Set against what is happening in Syria, the persistence of Mamallapuram over the centuries is particularly edifying. Mamallapuram is a town near Chennai which hosts a continuing tradition of stone carving since the Pallava dynasty in the 3rd century.  I visited as part of a jury for the Cities of World Craft (with Dr Ghada Hijjawi-Qaddumi and Mrs. Ruby Ghuznavi ), which endorses the efforts of particular cities to sustain their craft traditions.

I was impressed to find in Mamallapuram a thriving community of nearly 500 families working with a mixture of hand and machine tools. It’s certainly exacting work, but the pay seems reasonable and there appears to be a sense of community. Coming from Australia, where we are so sensitive about occupational health and safety, I worried that the artisans were not wearing masks. But nor do they wear helmets on motorbikes on busy Chennai roads. Fortunately, the state of Tamilnadu has universal health care. 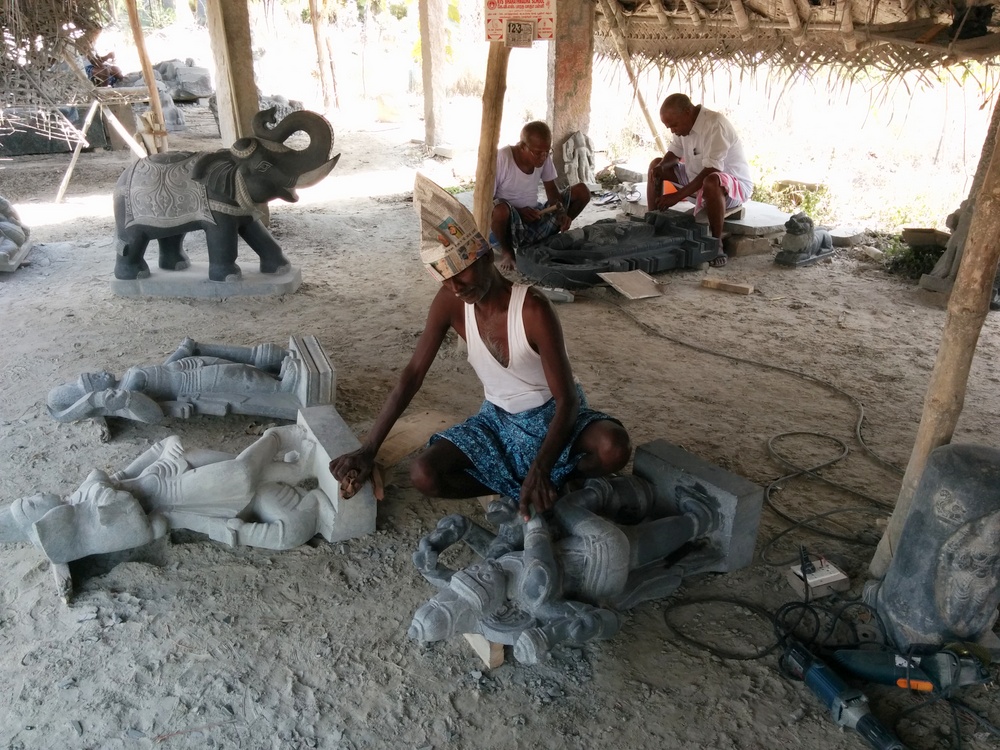 Working with hand and machine tools. 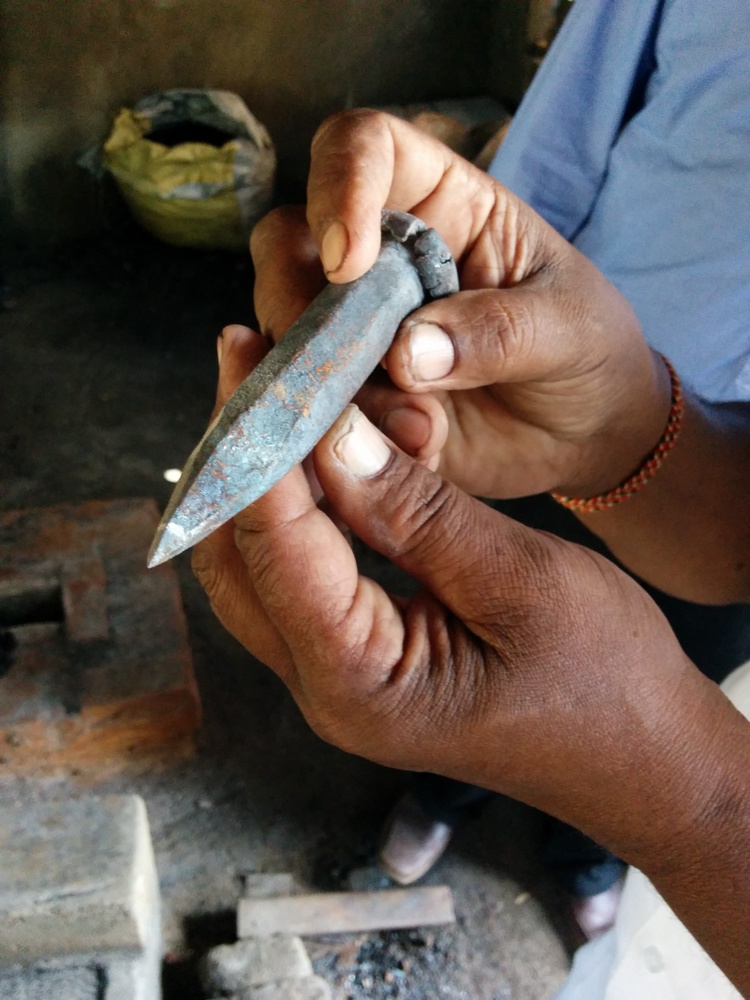 The chisel has to be sharpened hourly. There are men employed full time just to keep them sharpened all day.

The sculpture college seemed to provide a broad education which included not only the craft techniques but also related cultural knowledge such as Sanskrit. This teaching is important to understand the cultural context which gives meaning to their work. 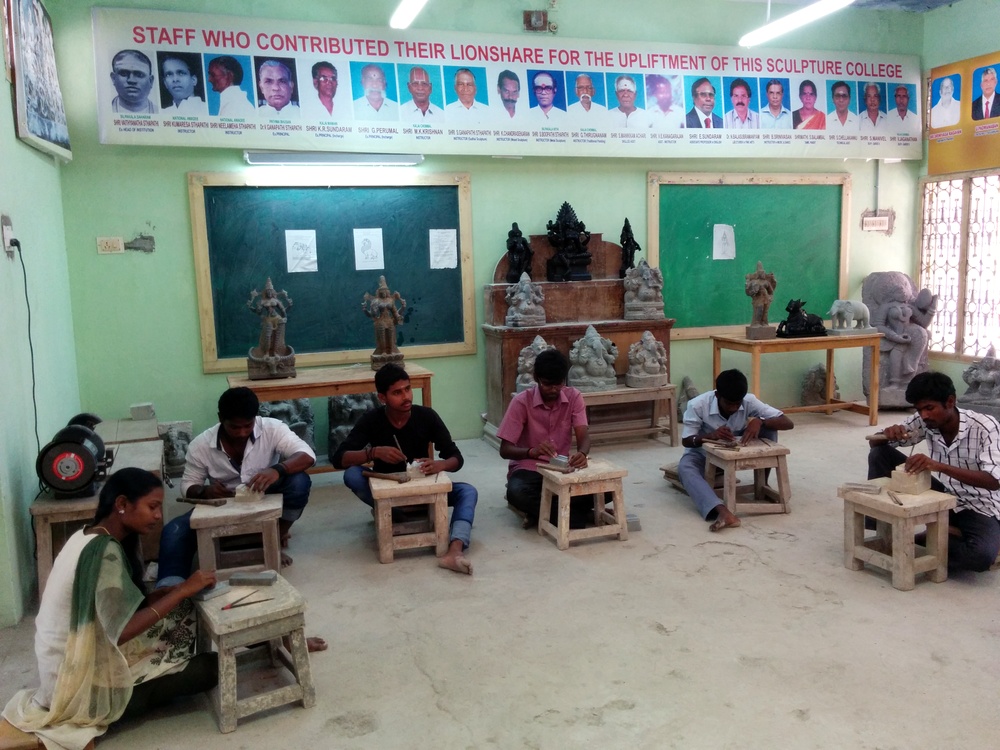 Students at the sculpture school at Mamallapuram.

There is relatively little design innovation apart from miniature sculptures for tourists. The design principles are taught from the ancient principles of Shilpi Shastra, which determine the various proportions of the body parts. 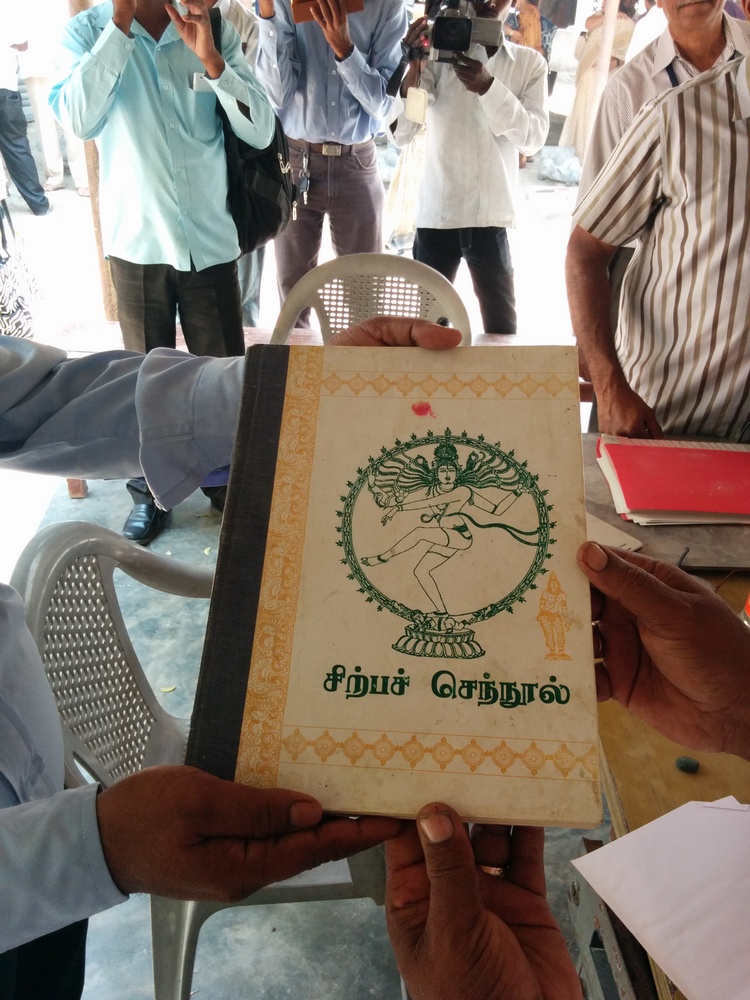 The Shilpi Shastra book wtih all the correct proportions for statues 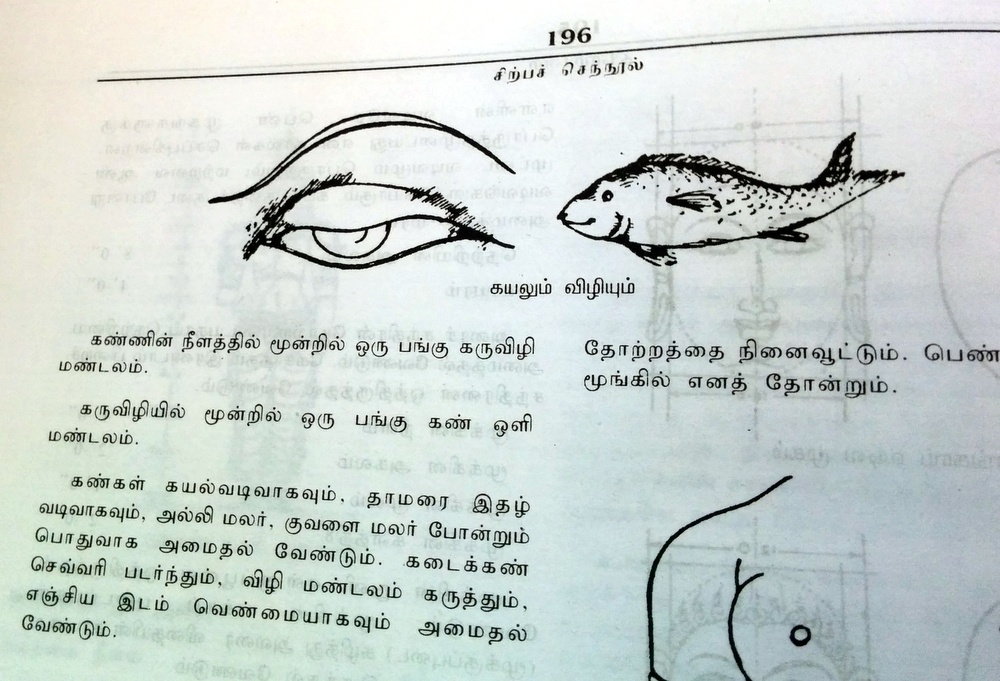 Much of the work now comes from foreign clients. Some of it involves public art of sculptures carved from photographs sent over email. But there is growing demand from the Indian migrant communities who need these statues for their new temples.

Here, the sculpture becomes more than an art object. It is an idol to be worshiped. This is evident in the many customs associated with the sculptures. During construction, the sculptures are usually covered with sand as a mark of respect. Here is one that is exposed for us to see. 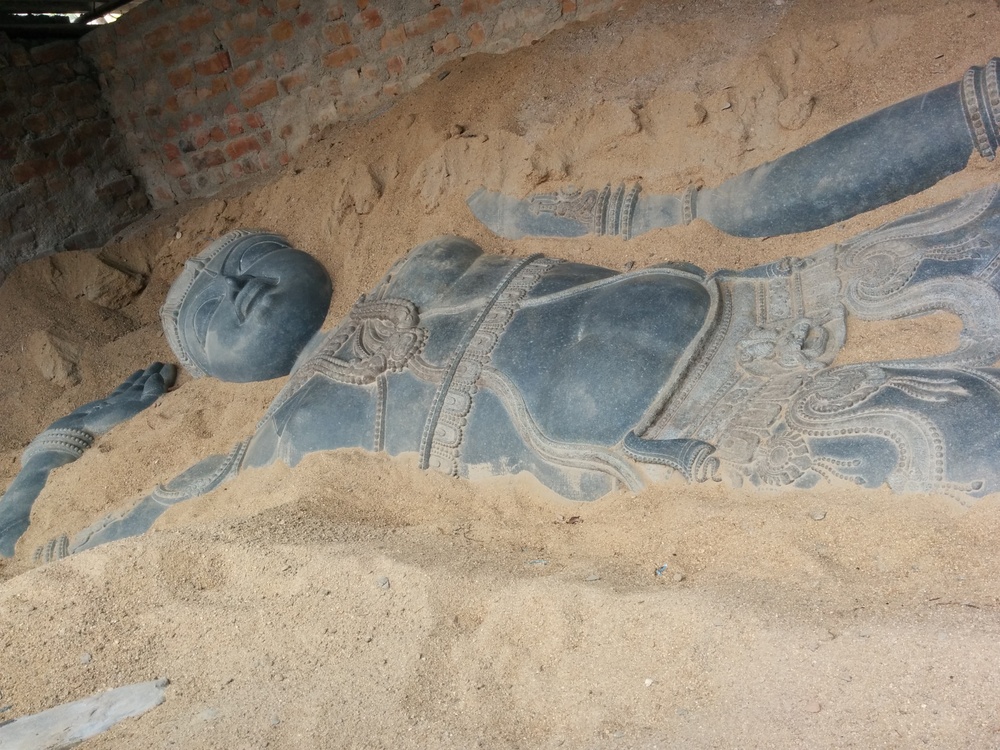 A large statue is usually submerged in sand to protect it from profane eyes before going to the temple.

They are also lovingly cared for, such as a weekly beauty treatment with coconut oil! 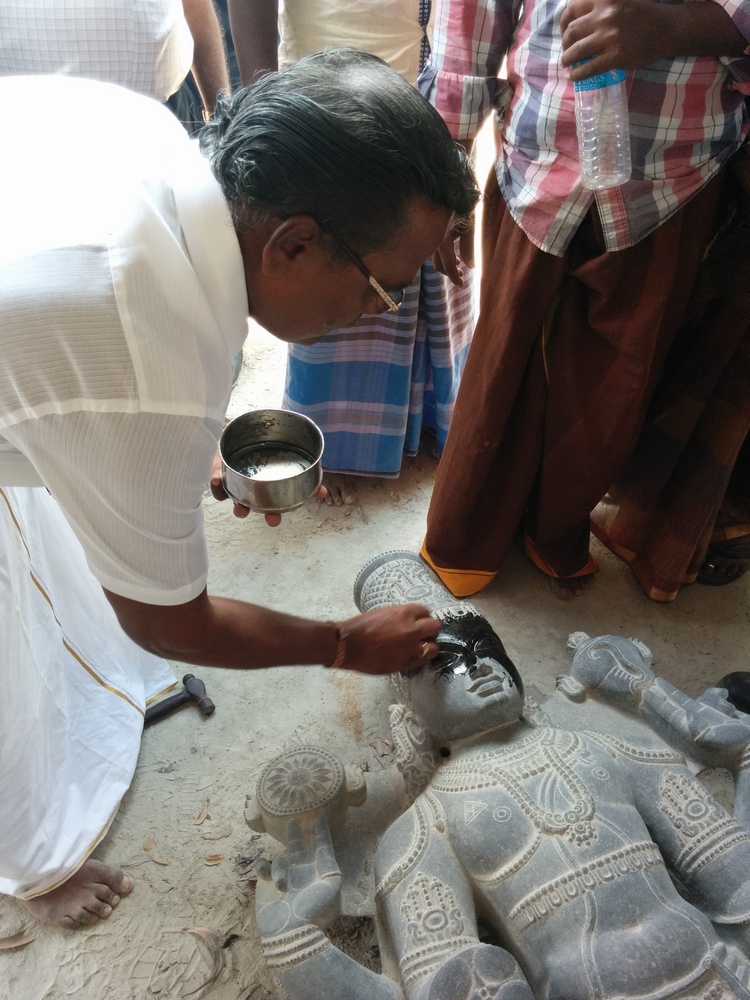 Freshening up a statue with coconut oil

But most remarkable is the ceremony the accompanies their entry into the temple, when their sacred status is activated. Here it is described:

These sculptures lack religious significance until its eyes are “opened” or sculpted (Nayanonmilanam). The eyes need to be opened at the temple itself, with a gold needle and a silver needle, both of which need to be provided by the temple or the client (and can’t be reused.) The right eye is opened with the gold needle, which evokes the image of the sun. The left eye is opened with the silver needle, evoking the image of the moon. A silver hammer is used as an aid as well. This is a job that only sthapatis are allowed to do, so if there is no sthapati in the area of the temple, either Mr. Shanmugan or Mr. Subramanian need to hitch on a plane to the locale and sculpt the eyes themselves. “I’ve been to Mauritius, Australia, Malaysia…” Mr. Subramanian noted. After the eyes are opened, only priests of the temple can touch the sculpture; the ownership of the sculpture (both religious and literal) has passed on from the sthapatis to the priests. 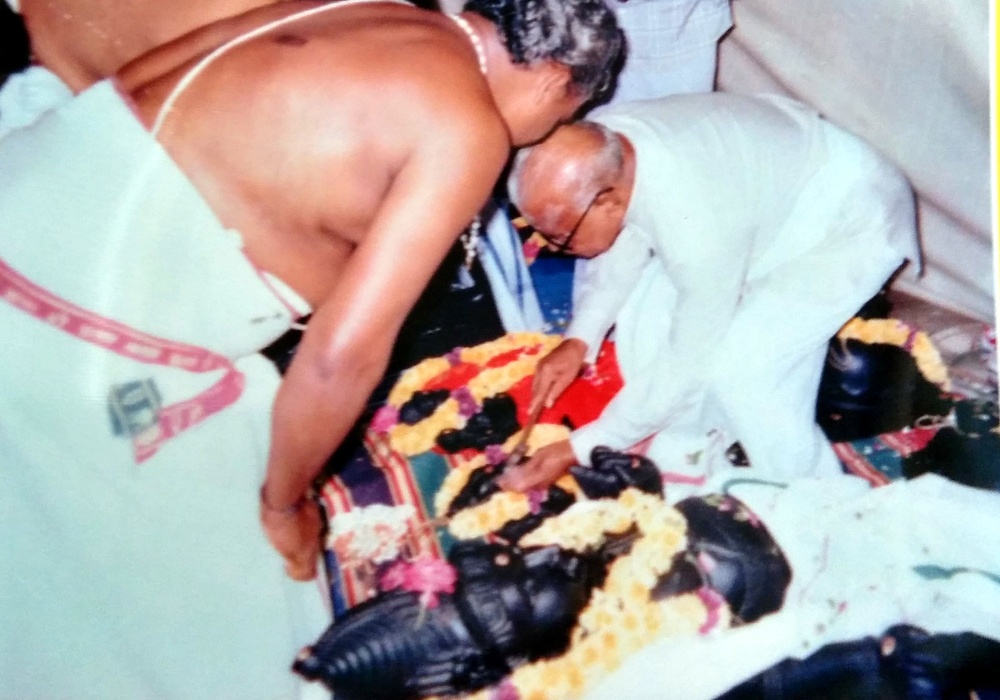 Opening the eyes on a statue

But it doesn’t stop there. Here Dr Santhosh Babu, chairperson of the Tamilnadu Handicrafts Development Corporation, translates the procedure that follows:

One presumes that the pleasure in its own craftsmanship eases the shock for the idol of its coming into existence. Along the way, this ritual changes our relation to an object which is looked at to something that can look at us.

These are the kind of magic processes that are lost when a craft object becomes just another consumer product. For those of us who are not Hindu, the challenge is to find other ways of activating our objects to they can give meaning to our world and the people we care for.

What should we do today? Would we hold a mirror up to your treasured craft object? Or would you prefer to post an image on Instagram? We have much to learn from the Indians about how to sustain a tradition.