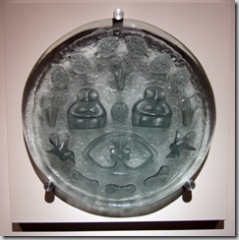 Now on show at the redoubtable Craft ACT is a collaborative exhibition by two glass artists – Luna Ryan from Canberra and Jock Puautjimi from Tiwi Island. The title of the exhibition Mamana Mamanta means ‘gradual friendship’. Both Luna and Jock gathered much of their glass from old television screens. The image on the left is one of Luna’s, titled ‘Vision of a fragile Eden series’ (2007, kiln cast recycled television screens).

Interesting how television, the window to the world of spectacle, can become a sculptural substance that freezes one particular scene.