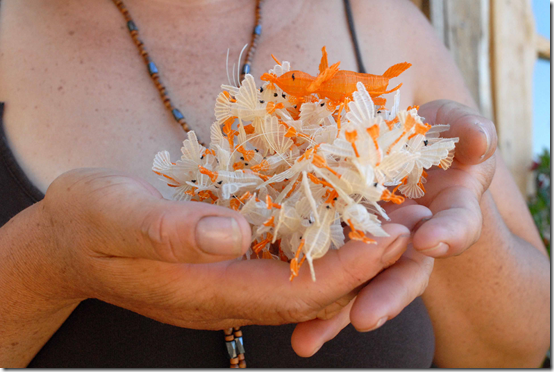 Crin is one of Chile’s most distinctive folk crafts. In markets around the country you will find delicate forms, often taking the shape of insects, woven out of dyed horsehair. Despite its distribution around the country, almost all Crin originates from a small town called Rari.

Crin appeared mysteriously around 200 years ago, as local women found they could weave poplar roots into figures. After discovering the flexibility of horse hair they combined a Mexican plant fibre Ixtle which provided structural strength. It’s not clear why this technique emerged there in particular, but the town’s proximity to a spa resort meant that there was a ready market for cositas (little things).

Crin is made entirely by hand. No equipment is involved, even knitting needles. But unlike the chunky results of finger-knitting, crin is exquisitely fine.

As a folk craft, crin was rarely taken seriously. However, it is now finding a niche as a versatile, colourful and particularly Chilean component in the burgeoning new jewellery scene in Chile. But its recent success comes with complications.

A Santiago architect Paula Leal has been exploring ways of collaborating with artisans from Rari. An earlier attempt with weaver Alba Sepúlveda led to the award for the 2008 UNESCO Seal of Excellence for Handicraft Products. The product incorporated modernist forms of crin into a hair clasp.

But the business of incorporating crin into jewellery is actually quite a political issue. In some ways, it parallels the movement of New Zealand jewellers who sought to include local materials and techniques such as jade carving into their work. In some cases, this meant reviving some of the lost Indigenous skills, while at the same time not simply imitating traditional Maori culture.

In the case of Chile, it is still the case that you can’t incorporate crin into your work without the willing cooperation of an artisan. It seems the nature of Chilean society that local skills are not easily generalisable. It would be extremely rare for someone in Santiago to teach themselves how to weave with crin. This division of labour creates an asymmetry, particular in the relative prices of crin sold in markets and jewellery featuring crin in fashionable jewellery boutiques.

Even for someone who has achieved success such as Paula, this can be difficult. She had to find some new crin weavers when her previous collaborator broke the partnership. Apparently, she felt resentment that she was sharing the stage with a designer who didn’t actually make anything herself.

Recently, Paula Leal formed a partnership with fellow architect Manuela Tromben in the development of an exhibition devoted to crin. Orígenes Y Atuendos Imaginarios (Origins and Imaginary Outfits) included jewellery and wall work that manipulated elements of traditional crin to create new works. For instance, the cylindrical form that normally is coiled to form the body of a snail was uncoiled and introduced into a necklace form. Local jewellers Walka Studio added the silver attachments.

Crin has a long way to go. There’s potential for much experimentation. It seems inevitable that someone in Santiago will eventually learn to make it themselves. But I hope that doesn’t exclude the possibility that some of the women from Rari might themselves engage actively with product development.

But here, on the other side of the Pacific, a recent exhibition in Melbourne shows an alternative path. Vicky Shukuroglou recently completed her Masters in Gold and Silversmithing. Vicky had previously taken a South Project residency in Brazil and was interested in weaving with alternative materials. While at RMIT she had furthered her manipulation of horse hair to create extremely delicate woven structures.

Vicky’s objects are designed deliberately to appear insubstantial. They certainly are not made to function as jewellery, lacking solid form and metal clasps. But as such, they might seem to be true to the wispy material itself, allowing it to unravel freely. Some are likely to worry that she is taking the object out of the normal circuits of exchange that connect it with people’s lives – it can only live on a plinth. Is this a possible path in Chile?

In all, what’s happening with crin tells a story similar to other crafts across the South. Part of the post-colonial process involves coming to terms with the immediate world around us. This means not always looking North for what’s precious, but learning in how to find the beauty in what is at hand.

That process has barely begun.