For the After the Missionaries issue of Artlink, a number of artists responded to the hypothetical scenario where a local council was seeking proposals for developing a project with its sister city in the Third World. How might a project bridge the global divide?

Claudio Torres is a Chilean artist/architect/musician who for the last four years has been working in various development projects in the slums of Nairobi, Kenya. In response to this call, he proposed a project involving ‘a painted mural on a ghetto wall’. Well, he is now at the point of realising this idea and is seeking support. He needs US$500 for materials, US$500 for rental and US$300 for a small daily allowance paid to the crew of youngsters who will paint the mural, to ensure it is finished in time.

To cover these costs, we are releasing 65 tickets at US$20 each. You can think of these as admission fees to see the mural, but that would involve also a ticket to Nairobi which isn’t covered by the ticket cost. Or you can consider it a small donation that helps spread art a little more widely around the world. Follow www.craftunbound.net to see the results.

You can see Claudio explain the idea here:

Here is the original proposal:

First of all, how to get to meet fine local artists?

Then, where to show?

Given most developing countries’ lack of what’s understood by western standards as art museums and galleries and the artists around them, and given also the shortage of art schools and markets, it seems suitable to address this collaborative work as a

PUBLIC COMPETITION FOR A PAINTED MURAL ON A RENTED GHETTO WALL.

1- To avoid biases or shortfalls in choosing local artists, a competition is the soundest way to tap into an un-reached art world, one surely driven by different aesthetic and social motivations. A prize is due to attract and rightly benefit artists that usually don’t get much in retribution for their work.

The actual production of the mural will be carried out by the local and foreign artists together.

2- Those few museums and galleries that exist are even more elitist and inaccessible than their occidental counterparts, allowing the artworks that they deal with to be seen by few people and at best reach only a few rich living rooms.

So, in countries where public art is at the bottom of the development needs’ list, a public wall is the right place to show and share; half of the urban population lives in overcrowded and service-less slums, therefore a ‘ghetto wall’ must be the right place.

3- Most third world walls are rented to big companies’ publicity. They get the best ones, often bordering highly-populated slums. Here is where the north-south collaboration can materialise. Money collected internationally (through web pages, etc.) and among the slum-dwellers will pay the rent for the mural. The show will last until is not possible to pay the rent anymore and the public wall returns to the dictates of free-market.

Thus, as important as the art work in itself is the time that the mural will last: a sort of ‘partnership-indicator’.

4- If more money than the needed is raised, a new competition must be held and another wall will be won for public delight and wellbeing.

The wall is waiting: 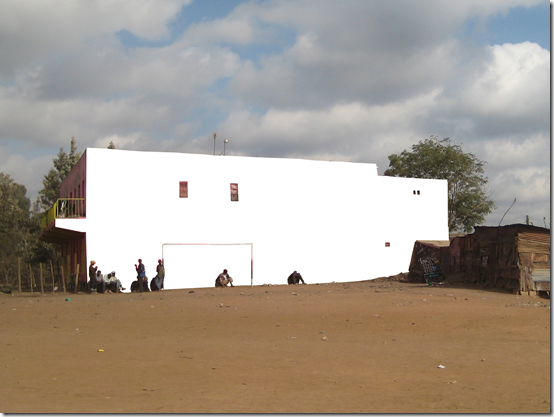