Here’s some news from the Gup Shup project in Pakistan (‘gup shup’ refers to the gossip that happens around cups of tea).

Winter has truly arrived, and the Chitral valley is surrounded with the snow-covered peaks of the Hindukush. In this cold weather, the women gather around the fire, chit-chatting and embroidering. Somehow, Israr and his team from MOGH Ltd (our local partners) miraculously manage to get us the textiles across the Lowari Pass (3200m altitude). Sometimes by air, sometimes through the new tunnel, sometimes across the icy mountains. So if you have had to wait for a bag you are coveting, there are very good reasons!

Zaibonda sold ‘Pot-Swap’ on the opening night of the ‘Gup Shup’ exhibition at the National Art Gallery (NAG), in Islamabad on International Women’s Day 2009. Using part of the money from the sale, her son Sajjid started his commerce degree at the Commerce College in Chitral. He had initially wanted to go to Peshawar, but the tense security situation in the city kept him up-country, close to his family. 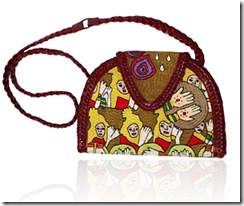 The ‘Pot-Swap’ bags remain popular. As one key supporter, who carries ‘Pot Swap’ on a daily basis, emotionally exclaimed “I feel such a connection to the woman who created this bag!”.

And other news – Naseema (one of the artisans responsible for the creation and embroidery of the lovely ‘Mantlepiece’, ‘Mehndi’, ‘Calender’ and ‘Harvest’ textiles) had her own mehndi in October. She is happily working as the warden of a nurses’ hostel in Chitral town, living with her husband, and occasionally travelling the 6 hours even further north to her husband’s village.

Though the crops were harvested in October ‘Gup Shup’ continues to bear fruit. Some news from across the globe:

Following the success of the textile exhibitions in Islamabad (8th March 2009), and Karachi (28th May 2009), we are hoping to be in Lahore next … the cultural capital of Pakistan. We’ll keep you posted on the exact venue and dates when we are passing through early next year.

The textile ‘Mantelpiece’ recently sold, to an Islamabad resident. And ‘Ice-cream’ has found a happy home and should be landing in Dubai soon. If you are interested in a textile, please do get in touch, as there are only a handful left …

‘Gup Shup’ went international, to Polly&me’s home shores of Australia at Craft Victoria in Melbourne, June 2009. Two textiles (‘Sultan the Sitar Player’, and ‘Games with Didi’) did us proud down under.

With such a multitude of loyal supporters in Dubai, we are eager to bring the ‘Gup Shup’ textiles with all the narratives and the endless cup of chai to Dubai, March 2010 – watch this space!

Do you want to know more? Email Ange at info@pollyandme.com