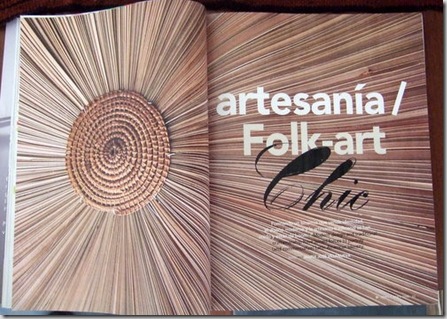 The in-flight magazine for LanChile identifies the position of craft in Latin America. It uses the Spanish work ‘artesanías’, which is usually translated as ‘craft’. However, in in the bi-lingual magazine, it is translated instead as ‘folk-art’.

Why use this term? The writer María José Villanueva positions artsesanía as a counterbalance to globalisation. It responds to questions about who we are and where we are coming from:

Folk art, now updated with a node to contemporary design, continues to provide answers to these existential questions, but with a twist: ‘folk chic’ or folk-art is emerging as a commercial niche that stands in stark contrast to mass-produced homogeneity.

These are noble sentiments which position craft as an alternative to dominant trends in modernity. But why ‘folk-art’? What has happened in the process of ‘updating’?

‘Craft’ has more of an emphasis on skill. It most often represents a body of techniques that are preserved and reproduced by a group of skilled practitioners. As such, it can be elitist and exclusive.

‘Folk-art’ is more democratic. It responds to a humanist sentiment and celebrates expression and the handmade.

While ‘folk-art’ seems more appropriate to our times, it does come at a cost. The demands a much lower level of skill than traditional craft. Ironically, it is a much more urban phenomenon, as harried city-dwellers seek the imaginary sanctuary of the handmade object.

The same could be said for the ‘neo-folk’ scene in Melbourne. What’s curious here is that the term ‘artesanía’ contains both traditional and modern concepts. It is only in the English word of ‘folk’ that the urban concerns are expression. I hope to find out more about the way this term operates, particularly in Chilean universities where craft is still taught.