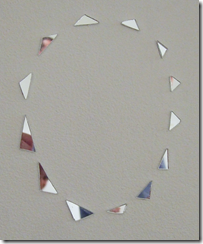 Mirror from Attempts at Describing Adornment

Suse Scholem is at the radical edge of the Melbourne contemporary jewellery scene. A graduate of Monash University, she is steeped in feminist and psychoanalytic theories.

Her previous show at Handheld Gallery in 2011 was Abject Object. It explored a feminist aesthetics by including body remnants as jewellery. While striking, it was framed in relatively conventional terms as art jewellery, reducible to the intentions of its maker.

The recent show at Footscray’s Trocadero Gallery focused instead on the interpersonal dimension. attempts at describing adornment was aesthetically quite minimal. It consisted of a variety of jewellery pieces, each featuring a series of words on porcelain. The words were garnered from interviews Scholem conducted with people about the way they present to the world. By filling out a questionnaire, contributing your own thoughts to the mix, you could then select your own piece from a box of ‘seconds’. The one I chose said:

Being a creature of Melbourne, I felt I could sympathise with this statement. But at the same time, I liked that it came from someone else. I find that I enjoy wearing it especially when I go out in brown. This accentuates that the words belong to someone else. After all, my brown is defined against the Melbourne black.

Essentially, what I’m wearing is a fashion statement. And there’s something liberating about reducing fashion to a literal statement.

Another touch I really like in Scholem’s exhibition was the mirror. It is common in jewellery exhibitions to have a mirror where you can try out the look of a piece on yourself. Scholem’s mirror follows the conventional oval outline, but only contains mirror shards pointing outwards, leaving the inside empty.

There were still a few elements that I thought could be further developed. The words were unfired, which means they are rubbed off with wear. While I can understand the conceptual rationale for this, I felt that it detracted from the value of jewellery as a relatively permanent adornment, which in this case would work nicely against the casual nature of the observations. Also, the language of the exhibition title and associated statements were quite theoretical and abstract. This renders the work as quite cerebral. A discourse that was more narrative or poetic might help wearers engage on other levels. There’s also the danger with overly theoretical art that you can run out of statements.

Scholem’s exhibition builds on other experiments with relational jewellery, particularly Roseanne Bartley’s Culturing the Body (2002), which invited wearers to bear politically charged words, such a ‘Queue jumper’, and collect public responses. This is a potentially rich vein of development. Of course, t-shirts provide a canvas for circulating witticisms in public. But jewellery tends to be more personal. It expresses a more intimate meaning. In this case, the reveals the meanings of others, within which we see ourselves.