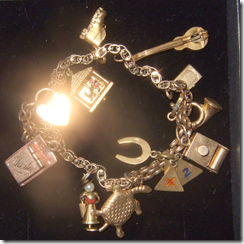 The charm bracelet was once a common gift used for the transitional age when a child looked towards becoming an adult. It was once the subject of fine craftsmanship as each charm contained delicate castings and intricate mechanisms. Today it has been largely replaced by the Pandora, which is a closed system of crudely manufactured components that emphasise fashion rather than meaning. Pandora is like the iPhone of jewellery. Components are all designed as modular units that fit together exclusively. A Pandora bracelet even comes with special ‘apps’. 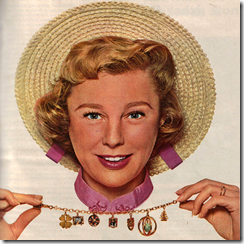 Older charm bracelets tell unique stories. On the verge of adulthood, the child is given a chain bracelet for the wrist. On the chain already are two or three intricate objects charged the meaning – a secret diary, a horseshoe for luck, a locket inscribed with the words ‘Travel time to happiness’ that opens to reveal a clock. Over the years, relatives returning from travels bring new component to fill out the bracelet  – an enamel ladybird, a turtle, a French horn and guitar…

It seems a to be world made to measure for a small person. It’s a way of inspecting the things of the world at close range. There’s also perhaps an element of magic involved, as though these were seeds for the eventual possession of real objects. But they are also public goods, that draw others into conversation – a magnet for the incidental praise that surrounds the world of a growing child.

This may well be a good time to return to the roots of the charm bracelet. The Italian cimaruta is an ancient charm that takes the form of a ‘sprig of rue’, at the end of which are a number of symbols, such as moon, fish, dagger and flower. The cimaruta is associated with the goddess Diana and often placed on the breasts of infants as protection, particularly against the evil eye. Without getting ‘neo pagan’ about such pre-modern symbols, the cimaruta offers an interesting model for jewellery as a form of symbolic value to be invested in the future.

So should the charm bracelet be revived? There is reason enough for their return as testaments to craft skills in gold and silver smithing. But as cultural artefact they can be seen as consumerist trainer wheels, preliminary to the eventual acquisition of domestic charm bracelet, featuring a Wedgewood dinner setting, Scandinavian furniture, French car and Milan coat.

The principle, however, seems inherently marvellous. The charm bracelet provides the armature around which a family circle can pin their hopes and support on an emerging adult. We were to keep this principle, what might be the charms for our time?

One thought on “A charm bracelet for our time?”